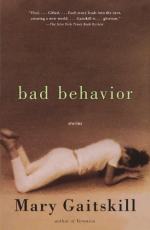 Related Topics
Veronica
The Mare
This Is Pleasure

Mary Gaitskill
This Study Guide consists of approximately 56 pages of chapter summaries, quotes, character analysis, themes, and more - everything you need to sharpen your knowledge of Bad Behavior.

New York City symbolizes the pursuit of professional dreams and artistic innovation. It also represents the struggles and disappointments that adults face after the promise of their youth subsides. Thus, many of the characters have resigned themselves to settling for jobs and giving up on their passions. Most of the characters that come to New York are unable to accomplish what they had initially set out to do, and are now reminded of their own failures by the success of others.

Sex is a means of release and escape from the tedium of one's life. Often, characters are unable to fully verbalize their internal turmoil, with sex alone allowing for an expression of their emotions. Fred is able to fully express his feelings and personality while having sex with Jane, and the man in "A Romantic Weekend" shows the true extent of his...