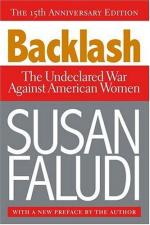 Use of Evidence to Make an Argument

Faludi's book is overflowing with data and information that she believes bolsters her case that the 1980s represented a period of backlash against women and their advances. Her supporting data comes from a wide variety of sources, including newspapers, scholarly and academic journals, personal interviews, and government and university studies. This use of authoritative sources is an important way writers convince readers of their argument; however, some critics have suggested that Faludi uses almost too much factual data and that its volume actually hinders her argument.

Faludi also includes short profiles of people she believes were critical to the evolution of the backlash against women in the 1980s. Inclusion of these profiles helps move the book along in a number of ways: reading about specific individuals who contributed to the backlash - even though Faludi obviously disagrees with their philosophy...