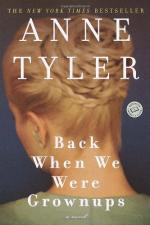 Back When We Were Grownups Summary & Study Guide

Anne Tyler
This Study Guide consists of approximately 30 pages of chapter summaries, quotes, character analysis, themes, and more - everything you need to sharpen your knowledge of Back When We Were Grownups.

Back When We Were Grownups Summary & Study Guide Description

Back When We Were Grownups Summary & Study Guide includes comprehensive information and analysis to help you understand the book. This study guide contains the following sections:

This detailed literature summary also contains Topics for Discussion on Back When We Were Grownups by Anne Tyler.

This novel tells the story of middle-aged Rebecca, suddenly discontented with her life after several years of managing a large, dysfunctional family and its business operations. As she attempts to build a new present on the foundations of an abandoned past, Rebecca discovers the value of the present moment and begins to enjoy and celebrate it.

The narrative begins with a description of a family picnic, organized by Rebecca (despite the resentment of her quirky, troubled family) to mark the engagement of her stepdaughter NoNo to a businessman named Barry. Barry's sullen teenage son Peter tries to escape, but Rebecca's attempts to bring him back into the fold end with Peter falling into a nearby river. As the members of the family (some irritated, some genuinely concerned) join forces to bring her and Peter back to the party, Rebecca realizes that her life has become something she never planned and has come to resent it instead.

Soon after, Rebecca takes a brief trip to her hometown to visit her mother and aunt. While there, she is reminded of her past relationship with, and near-engagement to, a man named Will Allenby. Idealized memories of Will entwine with Rebecca's discontent with her present situation, motivating her to search out, and get in touch, with the man whom she had once loved. At the same time, Rebecca becomes increasingly involved in the life of Peter, happily (and with grateful surprise) enjoying the friendship that's slowly growing between them. Meanwhile, she becomes increasingly resentful of the demands placed on her by her three step-daughters, an elderly relative, the Davitch family business, and her biological daughter.

After a couple of false starts, Rebecca's relationship with Will eventually progresses to the point where he invites her to his home for dinner with his volatile daughter. However, this meeting does not go well. Beatrice, the daughter, is extremely angry about how Will treated her mother (his ex-wife), and leaves after a short, bitter, and accusatory visit. Rebecca begins to sense that her ideas about Will and the possible joy he could bring into her life are somewhat illusory, but nevertheless persists, spending more time with him and eventually inviting him to meet the Davitches. The gathering to which he is invited is relatively successful, in that Will seems to get along with just about everyone, but Rebecca feels increased dissatisfaction with who he is and how their relationship has progressed. Eventually, she tells him she doesn't want to see him any more, and at yet another Davitch family gathering (this one celebrating the one hundredth birthday of an elderly relative), Rebecca realizes the value of celebrating the life she has that now includes an even closer relationship with Peter as opposed to longing for a life that she believed she wanted.

More summaries and resources for teaching or studying Back When We Were Grownups.

Back When We Were Grownups from BookRags. (c)2022 BookRags, Inc. All rights reserved.