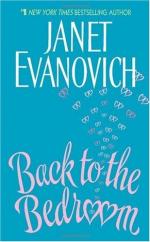 Back to the Bedroom Summary & Study Guide

Janet Evanovich
This Study Guide consists of approximately 31 pages of chapter summaries, quotes, character analysis, themes, and more - everything you need to sharpen your knowledge of Back to the Bedroom.

Back to the Bedroom Summary & Study Guide Description

Back to the Bedroom Summary & Study Guide includes comprehensive information and analysis to help you understand the book. This study guide contains the following sections:

This detailed literature summary also contains Topics for Discussion and a Free Quiz on Back to the Bedroom by Janet Evanovich.

Back to the Bedroom is a novel about a romance between two neighbors: Katherine (Kate) Flynn and David Dodd. The author opens the novel by describing the houses on Kate Flynn's street in Washington DC. Built in the early 1900s, many of the townhouses bear a plain facade. The house next to Kate's, however, bears more intricate designs and appealing color. The author describes it as a birthday cake among bran muffins. In this house lives bachelor David Dodd, who admires his single neighbor Kate Flynn, though the two only speak in passing. When a surveillance helicopter accidentally drops a camera on Flynn's house, however, Dodd take the opportunity to rush to her assistance.

The two notice an instant attraction to one another, despite their very different lifestyles. Since winning the lottery, Dodd follows no schedule. He draws cartoons for his comic strip, which enjoys moderate success. He also buys anything he fancies, from sports cars to electric train sets. Kate, on the other hand, operates on a rigid schedule of rehearsals, concerts and private lessons in her career as a concert cellist. She worries that Dodd's lack of drive makes them incompatible. Her brief and failed marriage to an oboist, Anatole, makes her more wary of serious commitment. Dave also worries about a relationship with Kate, because she never seems to have time for him.

Next the reader meets Elsie Hawkins, an elderly woman who rents Kate's third floor. Desperate to get out of her retirement home, Elsie rents the room even with a big hole in the roof. She quickly explains that she works at a local diner and enjoys an active social calendar of dating and bingo. Kate and Dave also learn that Elsie carries a large gun for protection. When she spots men snooping through the backyard shortly after she moves in, she uses her powerful gun to scare them off. She correctly guesses that the men are looking for the camera that crashed through Kate's roof. Kate later finds the camera in the bushes in front of her house.

For much of the novel, Dave pursues Kate, shooting down the reasons she gives for not deepening their relationship. Kate seems to accept the idea a number of times, until some perceived character flaw of Dave's, namely, his lack of motivation, gets in the way. She grows very dependent on him after breaking her leg during a football throwing lesson. Dave sets her up in his home in order to take care of her. Their physical relationship blossoms at this time. In addition, Dave invites Kate's parents and Elsie over for a dinner, which quickly turns disastrous.

When Kate recovers the camera pod in her bushes, she shows it to Dave, who recognizes a voice in the video as his friend Howie. Dave offers Howie the use of his house for future surveillance. The need arises for a stakeout during a dinner party Dave holds for Elsie, Kate and her parents. The stress of the night includes pressing questions from Kate's father towards Dave, Elsie's insistence on bringing her gun, and a raid on the house across the street which drives Omar, the criminal in question, into Dave's kitchen with a knife. Howie apprehends him only after Elsie threatens him with her gun.

The next morning, Kate asks to have a conversation with Dave concerning their different lifestyles. When he oversleeps and misses the opportunity, Kate decides to end the romantic part of their relationship. She does not see Dave again until the day she receives a leave of absence from the orchestra after an accident caused by her crutches. Dave helps her into the house, but Kate remains staunchly against a romance. She spends her free time much like Dave does, watching TV and daydreaming. She even consents to Dave's help in buying a kitten. When they return home, Anatole arrives with a get-well fruit basket from the symphony. Just as all three of them make their way outside, however, Omar appears, out on parole, and kidnaps Kate in Anatole's car. Elsie overhears the report her date's police scanner and speeds to Kate's assistance. She totals Anatole's new sports car when her heel sticks under the accelerator, effectively stopping the getaway.

Dave runs to Kate's assistance and she falls into his arms. She admits to her love for him and agrees to go home with him for the night before she discovers that her new kitten is missing. The discovery sends her into a depression about her own character. The next day, Elsie, Dave and Kate's parents all arrive, each with a replacement kitten to cheer her up. Then, Anatole arrives with a new fruit basket to replace the one he ate during the kidnapping. He tells her he put the first kitten in the backyard the night before. In private at last, Kate admits that having kittens makes her wish for her own children. Dave vows to support her in this, and they plan to get married. Kate points out that they need to move into a neighborhood that has children.

More summaries and resources for teaching or studying Back to the Bedroom.

Back to the Bedroom from BookRags. (c)2022 BookRags, Inc. All rights reserved.