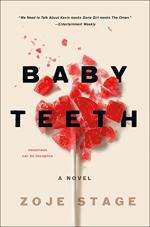 Zoje Stage
This Study Guide consists of approximately 53 pages of chapter summaries, quotes, character analysis, themes, and more - everything you need to sharpen your knowledge of Baby Teeth.

The following version of this book was used to create this study guide: Stage, Zoje. Baby Teeth. St. Martin's Press, 2018.

At seven-years-old, Hanna had never spoken a word to anyone. When the doctor told her mother Suzette that yet another CT scan had turned up no physical reasons for the developmental delay, he suggested that she and her husband Alex should consider consulting a child psychologist. Hanna had been kicked out of multiple schools for her strange, aggressive behavior, and Suzette leapt at the prospect of controlling her daughter’s outbursts so that she could stop homeschooling. When they returned to home after a trip to Trader Joe’s in which Hanna had lashed out at a toddler, Suzette tried to give Hanna a spelling test, but soon gave up after she wrote “Fuck Mommy. She is weak and stupid” (27). She left Hanna with a book and decided to clean the bathroom, a coping mechanism for stress that she had developed as a teen.

Suzette suffered from Crohn’s disease, a chronic inflammatory bowel disorder, and had spent many painful years nursing a post-surgery fistula, living as a near recluse in her depressed, widowed mother’s house. However, things changed when Suzette met her Swedish architect husband Alex. She had worked as an interior designer, but after marrying him and becoming pregnant, she quit to become a stay-at-home mother.

Hanna knew that her mother just wanted to get rid of her so that she could clean their beautiful house all day and have Alex to herself. She decided it was time to act. She knocked on the bathroom door and whispered “I’m not Hanna” (38) in the voice of Marie-Anne, a French witch she had read about online. Her mother did not react, but at dinner she told Alex. He was thrilled, until she told him what Hanna had said. Suzette also told him that she wanted to try enrolling Hanna at a school called Sunnybridge. Suzette took Hanna there the next day to speak with the principal. However, when Hanna was introduced to her, she barked like a vicious dog. Before they left, the principal suggested a different school for special children called the Tisdale School.

On the way home, Hanna saw that her mother seemed too happy, so she put the next stage of her plan into action. She had taken a photo of Suzette while she slept that morning, and she glued it into the center of a collage of photos of dead bodies that she had found on the internet and printed. When Suzette came in and saw it, she was horrified and shook Hanna, saying she would tell Alex. However, when Alex came home, Hanna had twisted her own arm so that bruises appeared, and when he saw them, he was furious with Suzette. They had a tense dinner, and Hanna decided that she could make Alex dislike Suzette even more if she made her ugly.

When Suzette woke in the morning, her daughter had cut off a chunk of her hair. Frustrated, she told Hanna that they would still go to Tisdale that day. They were greeted by the friendly principal, and Hanna even seemed to like the school. When they got home, they both took naps. Suzette woke to the sounds of sexual moaning coming from Hanna’s room. Disturbed, she rushed in. Hanna was naked on the bed, writhing as if she was having sex. She shouted that the devil was visiting her, putting his thing in her to give her power. Horrified, she called a child psychologist named Dr. Beatrix Yamamoto and made an appointment for that Monday after school.

After a long day of school, Hanna was relieved to be alone with the toys in Beatrix’s office. Meanwhile, Beatrix spoke to Alex and Suzette. Suzette liked her immediately as she explained that she believed Marie-Anne was an alter-ego that Hanna had adopted in order to start speaking, since she still was not ready to communicate as herself. They made another appointment for the next week, and Hanna continued going to school. She often misbehaved so she could be sent to the Quiet Room, her refuge from the other annoying children. But when she found a boy in a red helmet also there one day, she turned on him, taking of the helmet and barking at him so that he hit his head on the wall until it bled. Alex and Suzette were called in and told that she was expelled. Suzette told her she was a disappointment, and Hanna fumed.

The next morning, she had her revenge. When Suzette stepped out of bed, she stepped on the thumbtacks that Hanna had laid out during the night. Hanna entered, clutching a hammer. Suzette screamed that she was going to call the police, and Hanna ran. When Alex got home, they took the tacks out and called Beatrix, who told them to lay low over the weekend.

It was Walpurgis, and Alex decided that they could turn the Swedish holiday into an exorcism of Marie-Anne. Suzette helped Hanna draw a picture of the witch, and Alex built a bonfire in the backyard. The two parents felt optimistic, not realizing that Hanna had her own plan up her sleeve. They threw the drawing into the fire, but when Suzette spilled wine on herself, Hanna began chanting a curse and tossed coals at her with a stick. Alex rushed them all to urgent care, and the doctor told Suzette that the burn on her face would likely leave a scar. The next day at the therapist appointment, Beatrix asked whether she wanted Mommy gone or dead, and she nodded an enthusiastic yes.

For Suzette’s safety and Hanna’s best interests, Beatrix suggested that the Jensens send her to a children’s psychiatric facility called Marshes. Reluctantly, they agreed. They went on Tuesday as a family, and Suzette helped Hanna make a stuffed toy of the UnderSlumberBumbleBeast, a character from her favorite book. The next day, without telling Hanna where they were going, they drove to the facility in rural Pennsylvania. They left Hanna without goodbyes, and when she realized what was happening, she ran after them, crying and clutching her toy. Suzette felt that she was returning to normal, and felt a guilty joy that her daughter was gone. Weeks went by until they got a call from Marshes. Hanna was on the phone, speaking in her own voice for the first time. She asked to come home, and while Alex wanted to let her, Suzette gave a firm no. Furious, Hanna resolved to become the best girl ever so that she could come home and get revenge.

More summaries and resources for teaching or studying Baby Teeth.