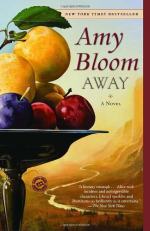 Get Away from Amazon.com
View the Study Pack
Study Guide
Order our Away Study Guide

Amy Bloom
This Study Guide consists of approximately 74 pages of chapter summaries, quotes, character analysis, themes, and more - everything you need to sharpen your knowledge of Away.

Away Summary & Study Guide includes comprehensive information and analysis to help you understand the book. This study guide contains the following sections:

This detailed literature summary also contains Quotes and a Free Quiz on Away by Amy Bloom.

Away is a fictional account taking place in the mid-1920's and following the life of Lillian Leyb and the circumstances that befall her as she searches for Sophie, the daughter she'd believed was dead.

Lillian and her family live in Russia until political unrest brings constables to their door. Lillian and her daughter Sophie hide, but the remaining family members are killed. Lillian can't find Sophie afterward and is told she was killed as well. The loss is so profound that Lillian is convinced to travel to America and start a new life.

Beginning as a seamstress she lives with her cousin Frieda, but Lillian soon learns how to improve her status and living arrangements. Bold and confident, she introduces herself to the Burstein men, father and son, and soon finds herself living in an apartment paid by the younger Burstein man. Her life is safe, and predictable until a cousin from Russia arrives and tells Lillian that her Sophie is alive and in Siberia.

Without considering much beyond the possibility of finding Sophie alive, Lillian sets off despite the objections of those around her who believe the trip impossible. With little money or possessions, Lillian must earn her way however she can. The pitfalls are many, beginning with her arrival in Seattle where she is soon mugged and left for dead in an alley. A young prostitute named Clothilde (Gumdrop to most people) takes her in, and introduces her to her cousin and pimp, Snooky (Walter to his parents). Before her time with them is up, she will have spent two weeks acting as Gumdrop's personal concierge; and helped Gumdrop to escape Snooky's wrath for stealing what she felt she was owed from him, leaving Walter dead in the alley behind his apartment.

From there, now on the run, Lillian boards an Alaskan Steamship for Prince Rupert. Once there, she is found by the local constable, Arthur Gilpin who takes her home for the evening. Widowed, Arthur would have been content had Lillian simply stayed the winter in his care, but unable to lie to him and tell him she'll willingly stay, he feels he has little choice but to confine her. Arthur handcuffs her to the bedpost over night, and in the morning explains that he will lie about her, telling authorities she tried to steal from him and, as a result, she will be sentenced to Hazelton for the winter.

Hazelton Agrarian Work Center for Women is filled with women who have lived difficult lives, and two weeks after her arrival, Chinky Chang arrives. Lillian saves her life when another inmate tries to throw lye in her face in the laundry room, and she and Chinky become inseparable until Chinky is released two weeks prior to Lillian's release. After the winter, Arthur and his new wife Lorena see Lillian safely into the hands of the mule train skinner in charge, telling him she is their daughter to ensure her safety. Lillian stays with the mule train to Echo Creek where she then proceeds on foot.

Lillian's journey has already been filled with peril, but nothing compares to the struggle she faces ahead. Walking the Telegraph Trail alone, she soon has blisters that open and fester on her feet; bug bites that bleed and become infected; and lice that move in and colonize her so completely that they can be seen walking in her hair. She experiences loneliness that has no end and despair that threatens to overwhelm her again and again, yet she still continues, determined to find Sophie.

Her arrival at Refuge Cabin Number Nine is something that does not surprise John Bishop despite how remotely he lives. He has two weeks notice from other telegraph operators that she has passed, and when she arrives he offers her first a bath and then food. He helps her to rid herself of lice, dress her wounds and clean her clothing. The next morning, she sneaks out and walks for half an hour before turning around, surprised to realize that she misses John so much. Feeling much the same way, John offers to help her find Sophie, but before they leave Lillian gets lost in a spring snowstorm and when John goes out to find her, he falls and breaks both of his legs. Though he survives, found by natives who take him home until he heals, Lillian has no way of knowing this and after searching for him for three weeks, and posting notes to him everywhere just in case he returns, she leaves for Dawson. There, she finds a boat she can man herself, and sets sail for Siberia. The trip is short, ending when her boat hits a rock and sinks, leaving her to swim for shore. Cold, and having lost everything, Lillian is finally at the end of her strength. She crawls into the brush and sleeps, exhausted until she hears rustling, and the first thing she sees next is John's hand.

More summaries and resources for teaching or studying Away.

Away from BookRags. (c)2022 BookRags, Inc. All rights reserved.