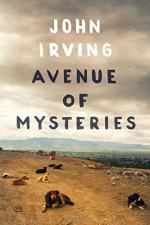 This detailed literature summary also contains Quotes and a Free Quiz on Avenue of Mysteries by John Irving.

Juan Diego is an accomplished writer and teacher as an adult, which is a dramatic change from his childhood. He has just retired from teaching when he takes a trip to various places in and near the Philippine Islands. The trip is arranged by a former student, Clark French, who is a well-known author in his own right. Juan allows Clark to set his itinerary, including where he'll be staying and how he'll travel. It's early in the trip when Juan encounters two women who capture his attention and manipulate his time and attention for most of the trip.

The women are Dorothy and Miriam. Juan believes Miriam is Dorothy's mother, but soon believes there is something strange about the women. When a young boy takes their photo, the two women don't appear. They seem to know things about Juan that he never revealed in public. Juan has sex with Dorothy and then with Miriam. He realizes that he can't stop thinking about the two women but he can barely think rationally about anything when he's with either of them. After days of sexual encounters, Juan Diego discovers that he's tired of dealing with both of them.

As he travels, Juan Diego thinks back over his life, focusing on a time when he and his sister, Lupe, lived in Mexico. They lived in a shack at the dump. Juan Diego's father, Rivera, was the boss of the dump workers. He looked after Juan Diego and Lupe, giving them his protection and providing for their basic needs. Juan Diego and Lupe shared a small shack with Rivera remaining nearby. Juan Diego was intelligent and taught himself to read in several languages, rescuing books from the dump. It was his reading that first captured the attention of a local priest, Brother Pepe.

Lupe was able to read minds and had the limited gift of telling the future. To everyone other than Juan Diego, her speech is garbled. This made some people believe she might be “retarded” though she was actually quite intelligent. Their mother was a prostitute and her speech was also garbled when she became excited. A local physician, Dr. Vargas, suggested that Lupe's speech impediment was genetic but he couldn't explain her ability to read minds.

When Juan Diego was 14 and Lupe a year younger, their mother was living the life of a prostitute. She also worked as a cleaning woman in a Catholic church. One day, she fell while cleaning the statue of the Virgin Mary. Juan Diego and Lupe saw the statue scare their mother to death before she fell, and Dr. Vargas confirmed that she did die of fright. Juan Diego and Lupe went to live in a church-run orphanage at that point, but their future was bleak.

The two joined the circus with the idea that their lives would be better there than in an orphanage or at the dump. They soon discovered that the lion tamer was a brutal man and that their time at the circus would be limited as well. Lupe felt that Juan Diego's future was tied up in the emerging relationship between a struggling young priest, Eduardo, and the transvestite he'd fallen in love with, Flor. She climbed into the lion cage and was killed, in order to set the wheels in motion to save Juan Diego from a life of uncertainty in Mexico. Juan Diego moved to Iowa with his adoptive parents, and it was there that he became a writer and teacher. Eduardo and Flor died of AIDS, and Juan Diego never married. He never got over the deaths of those he loved, especially Lupe.

When Juan Diego begins his final trip, he is planning his next novel. He battles the effects of beta blockers and sometimes manipulates the dosage. He argues with Clark over the politics of the church and other issues, but is obviously fond of the younger writer. They are visiting a church dedicated to Guadalupe when Juan Diego falls ill. Dorothy and Miriam, dressed as mourners, are in the church. Clark rushes Juan Diego to the nearest hospital, but it's obvious that he's dying. Clark doesn't notice that Dorothy and Miriam, still dressed in black, glide down the hall. Juan Diego remembers training to be a skywalker in the circus, and he knows that his life is ending. He is relieved that the ending is so simple.