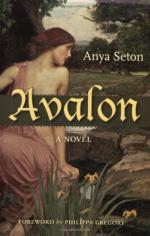 Anya Seton
This Study Guide consists of approximately 61 pages of chapter summaries, quotes, character analysis, themes, and more - everything you need to sharpen your knowledge of Avalon.

This detailed literature summary also contains Topics for Discussion and a Free Quiz on Avalon by Anya Seton.

This novel is an epic story that describes the fates of Merewyn of Uther and Romieux de Provence. Theirs is a journey that begins with a chance meeting on the way to Tre-Uther, and continues through England, Iceland, Greenland, and North America. Following the history of England's raids by the Vikings, Archbishop Dunstan's trials as he attempted to bring the masses to a Christian life, and Eric the Red's landing and colonization of Greenland, the story is one of love, devotion, and a basic struggle to survive that begins in the year of our Lord 973.

When Rumon meets Merewyn, he never imagines his life will become so entwined with hers. He is an Atheling after all, on a quest to England to to offer his services to King Edgar. A descendant from King Alfred and Charlemagne, he is still unable to refuse the dying request of Merewyn's mother, Breaca - to deliver Merewyn to her aunt in England. Breaca also confesses that Merewyn is actually the prodigy of a Viking raid that had taken place fifteen years earlier. Breaca then swears him to secrecy, Suddenly, he finds that he is the guardian and travel companion to the young Merewyn, her serf Caw, and her dog Trig. Nothing can prepare him for the seesaw his emotions will take, and it seems that there is no bond as strong as the love he finally realizes he has for her. Merewyn, on the other hand, falls for Rumon almost immediately. Feelings unfamiliar assault her during the short ride to Tre-Uther, and that is just the beginning. Her feelings grow quickly, and without reservation. It takes Rumon many years to reach that conclusion himself, though. Before that happens, he takes Merewyn to England as promised, offers his services to King Edgar, and befriends Archbishop Dunstan. Fate will separate them for years, but they remain in each others thoughts. Merewyn learns firsthand the truth of her heritage, escaping death in a Viking raid only when it becomes known that she is the daughter of the Viking captain, Ketil Redbeard. Instead, he takes her captive to Iceland. After many years, and one child in that country, she genuinely loves her Nordic husband.

During all of this time, she has never been out of Rumon's thoughts. Finally understanding the depth of his love for her, he searches for her to confess his feelings, only to find she has been taken by the Vikings. He attempts to follow, intent on bringing Merewyn home, but the ship he hires is blown off course and never reaches Iceland. Instead, victims of bad weather, they find themselves miles off course, landing finally at Great Ireland.

Circumstances conspire to keep the surviving crew there for some time, and when Rumon finally reaches Iceland, he is surprised to find that Merewyn is not the reluctant captive he thought she was. In fact, she looks quite content; instead of being thrilled to see him she is almost hostile by his intrusion. Stunned, he leaves and returns to England without her. Merewyn's husband then decides to join a group of colonists in Greenland, led by Eric the Red. Eric had assured them that the land was plentiful and free, but he had neglected to share the truths of the hardships of living in such a place, and there are many. Merewyn has her second child in Greenland, but the country finally takes her husband. She makes the decision to return to England with her children. Somewhere in the back of her mind she still believes that Rumon will help her. The surprises don't end there. In a twist of fate, Rumon has given himself to the church, and refuses even to see her, but Merewyn's life has a few turns of chance left.

More summaries and resources for teaching or studying Avalon.