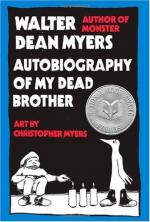 Introduction & Overview of Autobiography of My Dead Brother

Walter Dean Myers
This Study Guide consists of approximately 28 pages of chapter summaries, quotes, character analysis, themes, and more - everything you need to sharpen your knowledge of Autobiography of My Dead Brother.

Autobiography of My Dead Brother Summary & Study Guide includes comprehensive information and analysis to help you understand the book. This study guide contains the following sections:

Autobiography of My Dead Brother (2005) is a vivid, wrenching, and hopeful look into the confusing and scary lives teen boys face in poor, violent, urban worlds. Through innovative illustrations and honest characterizations, Walter Dean Myers captures the conflicts—internal and external, hopeless and hopeful—that less-privileged Americans face pursuing the American dream. A finalist for the 2005 National Book Award in the young people's division, Autobiography of My Dead Brother explores life in a Harlem neighborhood through the eyes of fifteen-year-old Jesse Givens.

Jesse is a gifted artist whose drawings (illustrated in the book by Myers's son Christopher) are an integral part of the text. Jesse uses his art to make sense of events around him, including the deaths of several friends, drive-by shootings, the threats of gang life, and the changes in his long-time "blood brother," Rise. Jesse tries to understand what Rise has become as Rise chooses to become involved in drugs and gangs. Jesse and his friends must also walk the fine line of seeking peer acceptance while remaining true to their own ideals.

Like Jesse and his friends, Myers grew up on the streets of Harlem and got in trouble while a high school student. Though he was always interested in reading and later in writing, Myers did not have hope for his own future by the time he was in his teens. He worked as a drug courier and became involved in gangs. Myers never completed high school, though he later earned a college degree. He drew on this background when writing books such as Autobiography of My Dead Brother.

In the novel, Myers uses authentic-sounding dialogue and plot developments to expound his themes. He emphasizes the importance of loyalty and friendship as well as the support of family and other trusted adults, while realistically depicting the tensions and traumas faced by teens in contemporary Harlem. Though Myers shows that the lure of drugs and violence is hard to escape and affects everyone, he also underscores the importance of trying to rise above one's circumstances using one's talents. With characters like Jesse and C. J., finding their identities and being true to themselves are critical steps toward a successful life.

Myers also highlights the power of self-expression—that is, defining one's self through one's abilities—in the novel. Characters like Rise, Little Man, and Mason have no such outlets and become victims of the streets. Emphasizing personal abilities also gives teens a means of escaping from their environment and hoping for a better future as they reach adulthood.

One of Myers's goals as an author of books such as Autobiography of My Dead Brother is to realistically depict this world he knows so well to affect the lives of his readers. He told Toni Brandeis of the Wisconsin State Journal,

If they can read about a problem, for example, with drugs, sex, or gangs, they can think about them before they meet these problems in the street, when it's much more difficult to make a good decision. What I want them to do with my books is to engage these problems.

More summaries and resources for teaching or studying Autobiography of My Dead Brother.

Autobiography of My Dead Brother from BookRags. (c)2021 BookRags, Inc. All rights reserved.