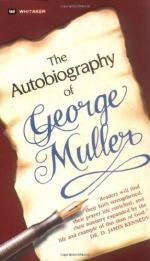 George Müller
This Study Guide consists of approximately 35 pages of chapter summaries, quotes, character analysis, themes, and more - everything you need to sharpen your knowledge of Autobiography of George Muller.

This detailed literature summary also contains Topics for Discussion and a Free Quiz on Autobiography of George Muller by George Müller.

George Muller begins his autobiography from his early childhood, at which time he confesses to being a shallow and misbehaving child. In fact, the death of his own mother fails to cause much pause in his selfish actions. He goes along wit his father's wishes to enter seminary, because a life of a minister in Germany promises a life of relative comfort and allows him to provide for his father in his later years. His first years of education away from his father find Muller often in trouble.

However, when a classmate invites him to a neighbor's bible study in his home, Muller begins to desire a sincere Christian lifestyle. He shares his newfound type of faith with his former friends, who laugh. This fails to deter Muller, however, and his devotion deepens. He feels lead to become a foreign missionary, a life of uncertainty, financially. Muller's father threatens to disown his son if Muller continues with this plan. However, Muller's devotion now lies with his god, and he pursues several possible assignments before moving to England.

Once in England, Muller, soon along with his new wife, begins to feel guilty for receiving a salary for their work for the Lord. Muller feels that such financial accommodations fail to allow him to live by faith. Thus, he severs ties with the mission's agency and cancels pew rental in his first church. Muller records his journey of living by faith to strengthen the faith of weak believers and possibly bring others to share his faith.

After several years in the ministry, Muller meets a fellow minister named Craik, and the two men move to Bristol t begin the Scriptural Knowledge Institution. The Institution serves many purposes, from religious education to literacy. They also ship bibles and support foreign missionaries. The bulk of their ministry, however, involves housing England's rising population of orphans. Without such ministries, the orphans frequently find themselves in immoral situations of overcrowded prisons.

Without ever asking for money or publishing the need of the ministry, Muller and his ministry operate the growing orphans' houses for decades in the area around Bristol, England. The orphan houses begin as one rented house for several dozen children. By the end of this record, Muller has built three houses that serve the spiritual and physical needs of more than one thousand orphaned children. He attributes his success to his willingness, along with countless others, to follow the Lord's will and grow their faith, even through hard times.

More summaries and resources for teaching or studying Autobiography of George Muller.