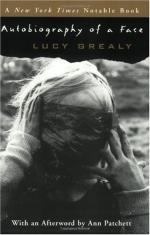 Plot Summary
+Chapters Summary and Analysis
Prologue, Chapters 1 and 2, Luck and Petting Zoo
Chapters 3 and 4, The Tao of Laugh-In and Fear Itself
Chapters 5 and 6, Life on Earth and Door Number Two
Chapters 7 and 8, Masks and Truth and Beauty
Chapters 9 and 10, World of Unknowing and The Habits of Self-Consciousness
Chapters 11 and 12, Cool and Mirrors
Free Quiz
Characters
Objects/Places
Themes
Style
Quotes
Topics for Discussion
Order our Autobiography of a Face Study Guide

Lucy Grealy
This Study Guide consists of approximately 29 pages of chapter summaries, quotes, character analysis, themes, and more - everything you need to sharpen your knowledge of Autobiography of a Face.

Autobiography of a Face Summary & Study Guide includes comprehensive information and analysis to help you understand the book. This study guide contains the following sections:

This detailed literature summary also contains Topics for Discussion and a Free Quiz on Autobiography of a Face by Lucy Grealy.

Lucy tells of her years as a hand for Diamond D Stables when she worked with her friend, Stephen. By the time she begins work there, she has had several surgeries, and her face is oddly shaped, invariably attracting attention. Lucy says that she got the job as a result of calling on the phone and not mentioning her disfigurement; she remains there four years. Arguably, the time she spends with horses is among the happiest of her childhood, though she says that she comes to be comfortable in the hospital as well.

Lucy, a tomboy, is terrible at organized sports, and it's a bump during a game of dodge ball that first alerts her family to the fact that there's a problem. She's first thought to have a cyst, but doctors eventually diagnose Ewings sarcoma, a deadly form of cancer with a five percent survival rate. At the time, Lucy doesn't realize the danger she's in but spends her time focusing on the reality of painful surgeries to remove the cancer - including a section of her jawbone. Next she undergoes two years of radiation therapy and chemo treatment, followed by another six months of chemo. Then there are a series of surgeries to reconstruct her facial features with the first several being abysmal failures.

Through it all, Lucy deals with a mother, who is afraid for her child's life and faces it in her own way - by showing no fear to Lucy. She encourages Lucy to do the same, and Lucy valiantly tries not to cry, feeling a sense of failure whenever she does give in to the emotions or tears. Back in school periodically over the three years of treatments and surgeries, Lucy is tormented by other children. She withdraws and works to convince herself that she doesn't need a boyfriend. Even into adulthood, she admits that her life is on hold as she waits for a new face - the face she deserves - to be achieved by the doctors.

Lucy misses a great deal of school but continues on through college, initially planning to attend medical school but eventually settling for poetry. She "finds herself" somewhat in college but continues to feel that the lack of a boyfriend and sex, is a gaping hole that makes her life incomplete. She does eventually meet someone, but the relationship ends abruptly and coincides with another failed reconstruction attempt.

After college, she spends some time abroad, taking advantage of the time to write and to come to terms with herself. She locates yet another plastic surgeon, and this time the process meets with more success. It's only then that she realizes that she doesn't have to continue to have her life on hold. She realizes that society tells us to be and look like someone else, but that isn't necessary.

More summaries and resources for teaching or studying Autobiography of a Face.

Autobiography of a Face from BookRags. (c)2021 BookRags, Inc. All rights reserved.