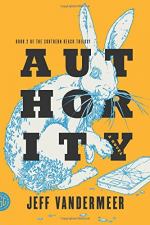 This detailed literature summary also contains Quotes and a Free Quiz on Authority: A Novel by Jeff VanderMeer.

Authority, the second book in the Southern Reach series by Jeff VanderMeer, begins with the protagonist, John Rodriguez arriving at the Southern Reach facility. This facility was developed thirty years prior when a manmade natural disaster created a contaminated area, known as Area X. This area was deemed unfit for human life, toxic. Expeditions were created and sent into the area to take samples and evaluate the conditions. No expedition had returned unscathed. Most returned as empty shells riddled with cancer, or babbling nonsense.

John Rodriguez was given the nickname Control, by his grandfather, Agent Jack Severance. As an agent for Central, his grandfather, as well as his mother, helped get Control his job with the organization. The reader learns that Control has had several assignments over the years, but that one job one wrong has haunted him for the last two decades. He allowed himself to become emotionally involved with one of the people he was supposed to be gathering intelligence from. As a result she was brutally killed. He was implicated and reprimanded by Central, then sent to another assignment. However, in each subsequent assignment he was scrutinized so heavily that invariably something was found to be wrong. Coming to Southern Reach is his last chance.

When he enters the facility he can tell that it is going to be an uphill battle. There is a pervasive rotting honey smell throughout the building, and the assistant director resents his presence. She acts as if the former director, a member of the last expedition, isn't dead and will be returning any day. He assures her that this is not true and that the former director, the team's psychologist on the expedition, has been declared dead. Grace, the assistant director, suggests that he not get too comfortable as she's going to make sure his stay is a brief one.

Entering his new office he is appalled at the rate of decay and the state of disorganization he encounters. There is a locked drawer in the former director's desk, which he manages to get open. He is astonished to see a perfectly thriving plant whose red roots are wrapped around a very dead mouse. He removes the plant and puts it into a pot with soil that he finds hidden in another part of the room. When he opens the door to a closet he sees written on the back wall the same phrase that had been encountered by various expeditions. It still doesn't make sense.

Control goes to interview the Biologist, who is one of three Expedition 12 survivors. He speaks with her, but she tells him that she is not the Biologist. She is Ghost Bird. He humors her and asks her about what she saw when she was in Area X. She says that she doesn't remember much at all (neither did any of the other returnees). All she knows is that she feels fine and wants to leave. Control consults his notes and sees that she was discovered returned and sitting in front of a brick wall in a vacant lot near her home. The other returnees were found at their homes. Before he can interview the other two he finds out that Grace has had them transferred to Central saying that she misunderstood him and thought he didn't want to debrief them. He is angry but decides to let it slide in essence of keeping the peace. Besides, of the three returnees it is only Ghost Bird whose readings are normal and cancer free. What has made her different he wonders?

The reader finds out that Control's childhood was anything but idyllic. His mother, whom he refers to as a flash of light against a dark sky, was a workaholic and seldom there, and his father was a frustrated artist. His parents divorced when he was still living at home and it was determined that he should go to live with his father and his father's family. In an effort to fit in with his mother, he determined to follow in her footsteps, careerwise. This saddened his father, but he didn't fight him on it. His father had died of cancer many years previous to his transfer to Southern Reach.

Control meets Whitby, Cheney, and a Linguist. They all comment on the writing on the closet wall. Whitby and Cheney take Control out to the border so that he can view it for himself. They tell him that when the 'event' first took place and the border was evident that the scientists took 200 rabbits and tried to force them through the border. Those that were forced through died agonizing deaths, but some of the rabbits simply refused to go through, opting to turn on the scientists and fight their way free. Cheney tells Control that the ancestors of those white rabbits are are still easy to see living in the swamps.

Each week Control is required to report to Voice, a disembodied, androgynous voice on the end of a digitally coded phone. Voice is caustic, snide, and unsympathetic to Control and the issues that he is having with Grace. Whenever Control asks for more background information on Southern Reach, Voice shuts him down. He goes to interview the Biologist one more time. She only remembers something from her childhood, and she's not positive that it actually ever happened. She reports that there is a 'brightness' inside of her that she can't quite explain. Control is intrigued, but doesn't want to press her any further. The next time they meet he arranges for her to be outside, where she seems to be more at ease.

She points out a beetle that is on the ground, acting strangely. She tells him that the beetle has been poisoned by an insecticide and that it is evidenced by the white moldy substance on its back. She says that the beetle will continue to run, thinking it is outrunning the problem, but in reality, the seeds for its own destruction are already inside of it. Eventually, it will suffocate. Control feels that there is some important message in this discourse, but he can't understand it fully.

The reader learns that aside from work, Control has little in the way of a life. He has a cat, named Chorry, whom he inherited from his father. The reader also learns that his father, in order to make a living, had started handcrafting original chess pieces. Some of these he has kept as a keepsake and he keeps them on his mantel. He takes a few of the other pieces and places them on his desk at work, adding small cameras onto them so that he can keep an eye on what is going on in his office when he isn't there.

Ironically enough, when he has a meeting with Grace the following morning, she accuses him of breaking into her office and rifling through her things. He denies it, but she is furious and storms off. He finds out later that she's had the Biologist sent away to Central, and then it is his turn to be furious. He goes to speak with Whitby, and when crossing through the cafeteria hears a noise coming from the janitor's closet. Thinking to have a word with the custodian about the rotting honey smell throughout the facility, he opens the door to discover Whitby, covered in sweat, looking washed out and pale. He is speaking nonsense and Control manages to get him to go to sickbay to be checked out. Later, he began thinking about the encounter and decides to explore the closet, himself.

As he goes through the director's old notes and files, he begins to realize that most of the expedition members had been heavily conditioned and hypnotic suggestions employed to keep them sane and compliant while in Area X. Some of the same phrases, however, are the same phrases that he realizes that Voice uses when speaking with him. He now suspects that he has been conditioned in much the same way. He devises a way to confront Voice and break the hypnotic suggestions. He does so and in doing this calls into question the reason why he's really been sent to Southern Reach. He is also more aware of things that he had simply ignored before. One thing now becomes imperative to him. He needs to explore Whitby's closet, he needs to find out just how far Area X's border is advancing, and he needs to know what sort of faction or conspiracy is happening at Central.

Going into Whitby's closet he finds a trap door in the ceiling and climbs up. There an attic space up there and against the far wall is a fantastical mural. It looks as if Whitby spent decades working on it. It shows various expedition members shifting and changing into mutated creatures. He's even started one that looks like Control. He hears a noise behind him and turns to see Whitby...or what is left of him. Whtiby is in the process of transforming. Terrified, Control flees the scene.

Control leaves and tries to make it back to his office but he finds that the walls have all turned to flesh. As he turns to go down another hallway he sees Grace standing with a smile on her face, looking toward the swamp. Emerging from the swamp is Cynthia, the former director. She is also changed. Control runs.

Control goes home where his mother is waiting for him on the doorstep. She tells him to calm down and attempts to use some of the hypnotic suggestions to make him compliant. He angrily brushes her aside and begins packing his suitcase. She warns him that everything she's done has been to protect him. He tells her to spare him the rhetoric that he doesn't believe anything she says anymore. She asks where he is going and he tells her Honduras. However, he purchases a second ticket under a different name...this one to Rock Bay.

Rock Bay is where he has a feeling the Biologist will run. Earlier in the week he'd learned that during her transfer the Biologist had managed to escape. Control, who has changed his name back to John, believes that she will return to somewhere near Rock Bay as this was one of her most cherished memories from when she was younger. He rents a boat and tries to avoid being followed. He eventually finds Ghost Bird, who threatens to shoot him. She is finally convinced of his sincerity when he tells her that he believes what she's been saying about not really being the Biologist. She also tells him that the 'brightness' that was inside of her is gone. He asks what happened to it, and she says that it exited her body and went into a hole. She thinks that it is another way in to Area X.

Meanwhile, agents from Central have zeroed in on their whereabouts. Ghost Bird (Biologist) tells him that she would rather die than be confined again. Before he can stop her, she jumps into the hole. Looking out at the gathering agents, he realizes that he really has no choice, either, and he jumps.