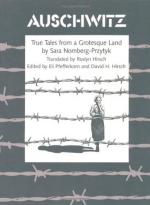 Plot Summary
+Chapters Summary and Analysis
Chapters 1 - 6, Alienation, Exchange, New Arrivals, Without Pity, Death of the Zugang, Salvation
Chapters 7 - 12, The Roar of the Beast, The Infirmary, What Kind of a Person Was Orli Reichert?, The Fight for Masha's Life, A Plate of Soup, Erika's Red Triangle
Chapters 13 - 18, A Peculiar Roll Call, The Block of Death, Morituri te Salutant, Marie and Odette, Esther's First Born, Old Words—New Meanings
Chapters 19 - 24, Children, A Living Torch, The Little Gypsy, Taut as a String, The Extermination of Midgets, Natasha's Triumph
Chapters 25 - 30, The Price of Life, The Lovers of Auschwitz, The Dance of the Rabbis, Revenge of a Dancer, The Verdict, Friendly Meetings
Chapters 31 - 36, Old Women, Ilya Ehrenburg Addresses Us, The New Year's Celebration, The Bewitched Sleigh, The Camp Blanket, In Pursuit of Life
Chapters 37 - 40, The Plagues of Egypt, Without the Escorts, The First Days of Freedom, The Road Back
Editors' Afterword
Free Quiz
Characters
Objects/Places
Themes
Style
Quotes
Topics for Discussion
Order our Auschwitz: True Tales from a Grotesque Land Study Guide

Sara Nomberg-Przuytyk
This Study Guide consists of approximately 25 pages of chapter summaries, quotes, character analysis, themes, and more - everything you need to sharpen your knowledge of Auschwitz.

"We were alienated. We felt that no one wanted us there." (Chapter 1, Alienation, 3)

"We were shown that here in Auschwitz we were just numbers, without faces or souls." (Chapter 3, New Arrivals, 15)

"Why did the Jews go so quietly? Why did they let themselves be taken to the gas chambers without protest? (Chapter 7, 33-4)

"You probably know that I put my own mother in the car that took her to the gas. You should understand that there remains for me nothing so terrible that I could not do it. The world is a terrible place. This is how I take my revenge on it." (Chapter 14, The Block of Death, 57)

"The imagination can conceive no penance that would atone for the bestial crimes that the Fascists...

More summaries and resources for teaching or studying Auschwitz: True Tales from a Grotesque Land.