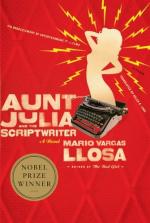 Mario Vargas Llosa
This Study Guide consists of approximately 45 pages of chapter summaries, quotes, character analysis, themes, and more - everything you need to sharpen your knowledge of Aunt Julia and the Scriptwriter.

Aunt Julia and the Scriptwriter Summary & Study Guide includes comprehensive information and analysis to help you understand the book. This study guide contains the following sections:

This detailed literature summary also contains Topics for Discussion on Aunt Julia and the Scriptwriter by Mario Vargas Llosa.

Aunt Julia and the Scriptwriter is the story of a young man finding his place in life. Marito is eighteen years old and he lives, works and goes to school in Peru between the towns of Lima and Miraflores. His parents left Peru to live in the United States, so Marito lives with his maternal grandparents. Miraflores is where his family was raised, so he has support and love from many family members still residing in Peru. Marito has a budding interest in becoming a writer and already has a love for literature, but he only shares this interest with his best friend, Javier. He takes his free time at work to write short stories and articles but ends up throwing most of them in the garbage. His family has dreams of him becoming a lawyer; therefore, he studies law at the University of San Marcos. It is clear that he isn't interested in law because he does just enough work to get by. Still, Marito seems to be a well liked young man and forges useful acquaintances and friendships with students and faculty at the university. Marito works for a local radio station named Panamericana, where he writes, edits and airs daily news reports. The reports air three times daily and he shares the work with an assistant named Pascual. Their office is a small shack on the roof of the Panamericana building, which is right next door to its sister station Radio Central. Both stations are owned by a father and son, Genaro Jr. and Genaro Sr. Radio Central is a more liberal, less conservative social radio station in comparison to the neighboring Panamericana. It is for this reason that Marito spends his free time at Radio Central as opposed to his own station.

These were the habits of Marito's life until he meets Pedro Camacho, the writer. Pedro is an odd looking writer from Bolivia, who the Genaros bring in to write the scripts for their radio soap operas. Pedro is quickly dubbed as a writing genius, but he has no social skills. Pedro is completely absorbed in the art of composing his work and claims to have no interest in social exchange. Something still draws Marito and Pedro together and Marito becomes Pedro's only friend. The friendship drives Marito to be a better writer and he finds passion for his work.

At the same time that Marito meets Pedro Camacho, he meets his Aunt Julia. Julia is a beautiful thirty-two-year-old woman who arrives in Peru from Bolivia after a divorce. She moves in with her sister and brother-in-law, Marito's Aunt Olga and Uncle Lucho. Marito visits his uncle and aunt weekly, so he starts spending time with Julia as well. They start out going to movies once in a while ,and eventually a romance flourishes between them. Marito's tight knit family is against the relationship wholeheartedly. As soon as they learn of it, the family begins plotting to break them up. Marito responds to the challenge by proposing marriage to Julia. After overcoming a few obstacles, she becomes his wife.

Marito's relationship with both Pedro Camacho and Aunt Julia shape Marito's future. Ten years after he meets them he is a published writer, successful author and professor living in Europe. Unfortunately, by this time, he and Aunt Julia have divorced, and Pedro has suffered from a mental breakdown. Marito is forced to sadly remember the role they each played in his becoming a man.

More summaries and resources for teaching or studying Aunt Julia and the Scriptwriter.

Aunt Julia and the Scriptwriter from BookRags. (c)2022 BookRags, Inc. All rights reserved.