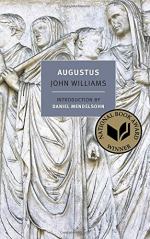 This detailed literature summary also contains Quotes and a Free Quiz on Augustus: A Novel by John Williams.

The following version of this book was used to create the guide: Williams, John. Augustus. Viking Press, 1972.

When Gaius Octavius is 17 years old, he meets his soon-to-be best friends while participating in military training in Spain: Marcus Vipsanius Agrippa, Quintus Salvidienus Rufus, and Gaius Cilnius Maecenas. Not long after the boys meet, a messenger arrives with the news that Julius Caesar, Octavius’s uncle, has been murdered. As confusion abounds, especially in allegiances, the four boys decide they can only trust one another. They make a pact, vowing vengeance against Caesar’s murderers. They sneak out of camp in the dead of night to return to Rome.

Octavius is named Julius Caesar’s definitive heir, although his mother Atia hopes he will denounce the terms of Caesar’s will for fear of inheriting his enemies as well. Octavius does not heed his mother’s warning and begins to go by the name Octavius Caesar. Octavius pays a visit to Marcus Antonius a week after returning to Rome, and Antonius advises Octavius to leave Rome while the mess of Julius Caesar’s death is sorted out.

The boys carry out a plan in which Octavius will speak to small groups of people, wondering aloud at the fact that the murderers have not yet been punished, followed by a public announcement that he will pay the monies to the public meant to be paid by Antonius. Antonius immediately introduces legislation to prevent the adoption of Octavius into Caesar’s family and makes open threats on his life. Eventually, Octavius and Antonius reconcile, but they begin quarrelling again not long after; they go back and forth so much that no one knows when they are allied or opposed.

As the arguments grow, both Octavius and Antonius raise armies to rally behind them, and many of Antonius’s men leave him to stand behind Octavius instead. Octavius and his forces creep upon Antonius in the dead of night as he lays siege to Decimus, one of the conspirators against Julius Caesar. A battle rages, and Octavius nearly dies, but backup arrives just in time, and Antonius and his troops end up fleeing to meet up with Marcus Aemilius Lepidus.

Antonius contacts Octavius not long after, and the two of them, along with Lepidus, decide to create a triumvirate to rule Rome for the next five years, with one of their main missions being to conquer the remaining conspirators. During their talk, Antonius reveals that Salvidienus wrote him a letter asking to defect to his side. Octavius writes to Salvidienus, stating that they are no longer friends. Upon receiving the letter, Salvidienius plunges a dagger into his chest.

The triumvirate begins ruling Rome and soon after begins executing senators complicit in the murder of Julius Caesar. Agrippa and Octavius train legions to lay siege to Brutus and Cassius, the two highest-profile living conspirators. Despite lengthy battles, both Brutus and Cassius lose and separately flee, falling upon their own swords.

Octavius returns to Rome to heal from within. He is engaged to three women in quick succession, although he only marries two: Clodia and Scribonia. To Clodia he quickly effects a divorce, and he marries Scribonia a year later. Octavius and Scribonia have a biological child together—Octavius’s only one—named Julia. Octavius divorces Scribonia on the day of his daughter’s birth.

Antonius and Octavius meet and sign a pact to avoid war once again, and a marriage is arranged between Octavius’s sister Octavia and Marcus Antonius. However, not long after this, Antonius travels to Athens, where he meets Cleopatra for the first time. Cleopatra gives him twins to raise as his own, and it is not immediately clear whether or not they are biologically his. Octavia becomes pregnant, and Cleopatra lights effigies each day to ensure the child will be a girl, which it is. Cleopatra then falls ill and makes the trip to Egypt in hopes of healing.

Antonius becomes angered that Octavius has divorced Scribonia, effectively breaking the treaty he brokered with Sextus Pompeius. While the triumvirate has recently been extended, he writes to Octavius that he can no longer work with him. He also sends Octavia and her children back to Rome.

Thus, Octavius is left to pick up the pieces in Rome. He negotiates a new treaty with Pompeius, but this is soon broken as Pompeius begins to conspire with Antonius. Eventually a battle is waged at sea, and Octavius’s fleet catches Pompeius’s by surprise. Most of his fleet is captured or destroyed, and he flees, only to be captured and killed soon after. Back in Rome, Octavius makes a speech stating that Lepidus is a false leader. One of Lepidus’s guards attempts to kill Octavius but fails, and Lepidus is exiled from the city forever.

Around this time, Marcus Antonius marries Cleopatra and is declared Imperator of Egypt. Many of his troops desert him, not wanting to follow a foreign leader. There is an enormous battle in the bay of Actium, and Cleopatra ends up fleeing, with Antonius close behind. Antonius pleads with Octavius for his life, but Octavius never responds. Antonius commits suicide poorly and dies slowly, and Cleopatra takes her own life as well.

Octavius marries Livia not long after, and Livia becomes Julia’s natural mother. At the age of 14, Julia marries Marcellus, and she thinks this normal at the time. Octavius falls very ill, requiring severe medical attention to nurse him back to health, although Marcellus dies two weeks later of the same fever.

Life continues as normal in Rome, and politics continue to be of the utmost importance to Octavius and his friends. Octavius passes new marriage laws, making adultery punishable by death. Julia is married to Marcus Agrippa in an attempt to keep her close to power, and she has four children, three of which are male and could become heirs. Julia decides to go against all custom and accompany Agrippa on a diplomatic mission to the East.

Julia begins to act out in ways that Octavius finds unsavory. When Agrippa catches a fever, she refuses to see him until the next day, and he dies. A year and fourth months after Agrippa’s death, Julia is betrothed to Livia’s son Tiberius, a horrible man by all accounts. Julia and Tiberius live apart for most of their married life, and Julia begins to take lovers on the side. She falls in love with Jullus Antonius and Tiberius finds out about the affair. A plot is uncovered in which Jullus and his friends planned to kill Tiberius and Octavius. Jullus commits suicide and Julia is exiled for life.

Octavius grows older, and he watches as his friends die one by one. Tiberius returns to Rome and becomes the official heir to the Roman throne. In the last days of his life, Octavius sails to Capri, reminiscing on his life. He dies on August 19, in the same room his father had died in 72 years prior. Two weeks later, Julia dies as well, and there are rumors that she was starved to death by Tiberius.