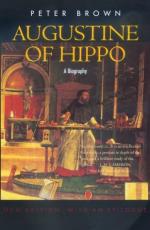 Peter Brown (historian)
This Study Guide consists of approximately 28 pages of chapter summaries, quotes, character analysis, themes, and more - everything you need to sharpen your knowledge of Augustine of Hippo.

Augustine of Hippo: A Biography, by Peter Brown Summary & Study Guide includes comprehensive information and analysis to help you understand the book. This study guide contains the following sections:

This is a biography of Augustine of Hippo. This is the story of a man who lived during a special "epoch" in history, during the change over from when the Roman Empire was distinctively pagan into when the same Empire turned Christian. While it may not have seemed extraordinary at the time, for readers today, this is an exciting time period. It was probably not foreseen at that time that the Catholic Church would proliferate and survive as a kind of cultural descendant of the Roman Empire, but like the Roman Empire, it to would be divided in "half" - the Roman, Western side and the Eastern, Orthodox side, which is closer to Arabia in the South and Russia in the North. The book describes Augustine's development, both in terms of the course of events in his life and in the cultivation of his thinking. The brief overview of his early life then progresses through his education. He was educated in Carthage and in Rome. While the norm would have been for him to return to Thagaste and remain there for the rest of his life, he instead went all the way to Milan. He "abandoned" both his mother Monica, and his beloved concubine to do this. The impression is that he found the separation from each difficult, but that the women found it much harder. He deceived them and ran away in the night, just to have the courage to part, not out of malice.

Augustine secured the necessary educational components to fulfill his life mission. His first famed work was as a professor. He went into a kind of seclusion after this. Following that, he was led into the priesthood. This only occurred after some reflection and after spending time among a group of intellectual friends who endeavored to live as Servei Dei (servants of God). Then, having become familiar with a congregation he was vigorously recruited by that congregation to be their new priest. Years later, he was chosen by the people once again to become a bishop. He migrated within Numidia to the port town of Hippo. He was not from Hippo, but this was not such a distant relocation as his journeys to Rome. He exhibited some reluctance about this, but they insisted. Those who chose Augustine felt he really did want the role they were putting him in, but he denied this. During his decades as a bishop, Augustine learned to assert what he believed to be most true and best for the people in his region. His work in Hippo was more of a political position than would be allowed in modern America. He ended his life working as a bishop. Augustine's life ended as Roman Africa was collapsing and Germanic tribesmen were growing in power in the region.

More summaries and resources for teaching or studying Augustine of Hippo: A Biography, by Peter Brown.

Augustine of Hippo: A Biography, by Peter Brown from BookRags. (c)2022 BookRags, Inc. All rights reserved.