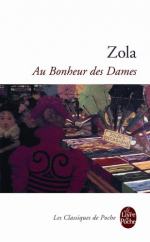 Émile Zola
This Study Guide consists of approximately 54 pages of chapter summaries, quotes, character analysis, themes, and more - everything you need to sharpen your knowledge of Au Bonheur Des Dames = the Ladies' Delight.

Au Bonheur des Dames presents a look at late nineteenth century Paris and the introduction of the large department store. It takes a close look at the conditions in the department store, as well as the appeal to its customers and affect on the small businesses. This backdrop is the scene of a developing romance between Mouret, the store's owner, and a girl from the provinces, Denise, an unlikely match given their different social status. As Denise learns about the struggle for survival, Mouret discovers that his money cannot buy what he really wants.

Denise arrives in Paris with her brothers a year after her parents have died. She is hoping to get a promised job in her uncle Baudu's shop. Her uncle does not give her a warm welcome. Denise ends up getting a job at the department store, but after almost a year is still not able to make ends meet. She takes extra work, which leads to her dismissal. She spends two months in poverty, until her uncle's friend and her landlord gives her a job, even though he does not need any help in his struggling business. Denise works with him for several months until she finds a job at another shop.

Mouret uses and exploits women, including Madame Desforges. After the luck in the store's expansion after his first wife died, he vows not to marry again, but to use up the women of Paris to make his fortune. As the store grows and the success exceeds his dreams, he finds that he cannot stop thinking of Denise. When she returns to the store as the other shop is dying, Mouret becomes obsessed with her. However, Denise refuses to be bought. She wants to remain respectable, mostly for practical reasons of keeping her life calm and predictable.

Baudu's struggle against the large department store ruins his family. His assistant leaves to pursue a sordid salesgirl instead of marrying Baudu's daughter, Geneviève, and taking over the business. This blow kills Geneviève. Her death represents the death of the old ways of trade in the neighborhood, as all the businesses are being crushed by the department store. Soon after, Baudu's wife also dies. Baudu's neighbor Bourras, resists letting Mouret get his house, but eventually Mouret finds a way to expand the store to take up the whole block.

Mouret suffers with desire for Denise. He gives up his affairs, and loses his interest in his business's success. Denise is worried about the rumors in the department store about her. She becomes friends with Mouret, but still resists becoming his mistress. She decides to leave the store, knowing that she will soon give in to Mouret otherwise, and not wanting the other employees to think poorly of her. Mouret does not want her to leave. He realizes he would rather marry her than suffer any more. She prepares to go on her planned leave, where Mouret will marry her and bring her back with a spotless reputation.