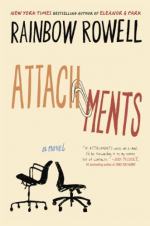 Rainbow Rowell
This Study Guide consists of approximately 79 pages of chapter summaries, quotes, character analysis, themes, and more - everything you need to sharpen your knowledge of Attachments.

The following version of this book was used to create this study guide: Rowell, Rainbow. Attachments. Penguin, 2011.

Attachments begins in fall of 1999. Film critic Beth Fremont and copyeditor Jennifer Scribner-Snyder are best friends and coworkers at the Omaha Courier Newspaper. In their emails, Jennifer and Beth exchange witty banter, jokes, and an underlying affection to help them get through their frustrations in life and love. Jennifer is married to Mitch, a high school music teacher and marching band leader. Mitch wants to have kids, but Jennifer is more reluctant. After almost willing it to happen, Jennifer becomes pregnant. Beth, meanwhile, is living with her college boyfriend of eight years, Chris, a musician and the lead singer in a rock band, Sacajawea. Chris has lived with Beth for many years, but Beth gets the sense that he will never propose. With her younger sister getting married at the end of the year, Beth feels the stagnant nature of her relationship with Chris deeply. Over the course of the novel, Beth struggles with the simultaneous comfort and coldness she gets from Chris. At times, Beth rationalizes his laziness, but there is an underlying frustration she has when she admits their relationship is going nowhere.

Lincoln O'Neill, in his late twenties, is new to the Courier having just been hired as an Internet security officer as part of the Information Technology department. The Courier is new to email and the Internet and wants to remain vigilant about waste of company time. Lincoln works the graveyard shift reading employees' emails that are flagged for inappropriate content. Soon, though, employees catch on and adapt. The only conversations that continually land in the WebFence folder are Beth and Jennifer's. Instead of turning them in or warning them, however, Lincoln continues to read their correspondence, feeling a sense of human connection and, later, a love for Beth.

Before the action of the story, Lincoln lived at home with his overbearing mother, much to the chagrin of his older sister, Eve, who was married with kids and actively trying to distance Lincoln from their mother, who had undiagnosed severe separation anxiety issues. Lincoln was still recovering from the fallout after his relationship with his high school girlfriend, Samantha, dissolved when he followed her to college in California. Eventually Lincoln transferred to a local university, but he still felt raw from how things ended with the passionate, outspoken, and mercurial Sam.

Throughout the course of Attachments, Lincoln tries to find out who he was and what his strengths were. Lincoln gradually makes more friends, both with the night shift copyeditors and an older employee, Doris, and begins working out and thinking about taking classes at the city college since he has a curious mind and a love for learning. He also moves out to an apartment, though he does not tell his mother this right away.

Lincoln and Beth's lives intersect. Beth's emails turn up a frequent reference to a handsome, strong, hunk of a man at the Courier on whom she has a crush. Lincoln pieces together that her crush is in fact on him. Beth becomes more aggressive in trying to find ways to formally meet him, but it is not immediately apparent to Lincoln who Beth is or what she looks like. This attraction bolsters his confidence, but Lincoln realizes the ethical dilemma he has gotten himself into by violating Jennifer and Beth's privacy. Not long after the new millennium comes on January 1 and after the IT team works to avert a disaster with the Y2K issue, Jennifer and Beth's emails stop showing up in Lincoln's queue. He rationalizes to himself that this is a good thing and he can finally think about dating her without the ethical issue hanging over his head. Lincoln takes steps to establish himself in his new apartment and also expand his social circle, all the while missing Beth and Jennifer's banter. When Jennifer and Beth's emails do show up again, something is clearly different in their tone. One night, Lincoln finds Jennifer trying to change a flat tire in the pouring rain. He helps her, and then realizes that the tragedy that Beth and Jennifer were alluding to was the loss of Jennifer's child when she miscarried. Jennifer had mentioned pain she was having, but the midwife reassured her falsely that everything was normal.

Beth and Jennifer return to their ease of conversation, though Jennifer is clearly in mourning after the miscarriage. In late February, Jennifer finally asks Beth about her sister's wedding. Beth narrates the experience, including how she and Chris broke up after he admitted to her outright that he would never marry her because loving her was too much. She kicks him out of the apartment. Lincoln sees this as his chance to make a move on Beth, especially since it has been many weeks since she broke up with Chris. However, Beth seems more indifferent about her cute guy and begins to date another man. Lincoln is heartbroken and quits his job, leaving a note on Beth's desk explaining his transgressions with violating her and Jennifer's privacy. Lincoln accepts a new job in IT and Internet security at a local university that gives him tuition benefits so he can take classes.

Many months pass, but one day Lincoln sees Beth in a movie theater. She recognizes him both as her Cute Guy and as the man who read her emails. Still, they kiss and after the movie, Lincoln follows her back to the Courier office. They discuss the awkward situation they are in, but both of them seem happy together. At the end of the novel, Lincoln and Beth's relationship is going well. They hint at a marriage in their future, and meeting each other's families was a positive experience. Beth is deliriously happy that she could be loved by someone who does not need as much space as Chris did. They are both wildly in love.

Attachments is an epistolary novel, one that is told in letters or, in this case, emails. Jennifer and Beth's chapters are presented as email correspondence. Because Jennifer and Beth write in the present tense as if they are having a conversation, their chapters will be summarized in present tense, excepting events the friends describe in the past tense. Lincoln's chapters are written in past tense and thus will be summarized in past tense.