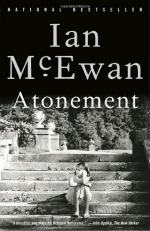 Ian McEwan
This Study Guide consists of approximately 69 pages of chapter summaries, quotes, character analysis, themes, and more - everything you need to sharpen your knowledge of Atonement.

This detailed literature summary also contains Topics for Discussion and a Free Quiz on Atonement by Ian McEwan.

Atonement follows a 13-year-old aspiring writer, Briony Tallis, from the failure of her first childish attempt at drama, The Trials of Arabella, to its presentation, six decades later, by the grandchildren of the ginger-haired, freckled cousins who had wanted to be its stars. Briony is the youngest of the Tallises' three children, raised virtually as an only child because a decade separates her from Cecilia and their 12-year-older brother Leon. Leon, an easy-go-lucky banker in London, brings a rich and vapid friend, Paul Marshall, home for a summer holiday, occasioning Briony's play and a formal dinner party in his honor.

The cousins, 15-year-old Lola Quincey and identical twins Pierrot and Jackson, age 9, arrive at the Tallis estate as refugees from parental divorce. Frustrating rehearsals and rivalry with Lola contribute to the collapse of the play, but its demise is more motivated by Briony's decision to write a story about a confrontation she accidentally sees between Cecilia and 23-year-old Robbie Turner, the family landscaper and childhood friend of Briony's siblings, whose education has been financed by their father. Cecilia is ready to move on with her life, but she feels obliged to give the family one last summer of attention. Robbie is looking forward to beginning medical school.

Cecilia and Robbie, albeit vaguely, that they must clarify their relationship before leaving. Preparing for the festive dinner, Robbie types a note to Cecilia that includes inappropriate sexual musings. He handwrites an expurgated version, but in a Freudian slip he hands the wrong version to Briony for delivery to her sister. Briony reads it and is shocked, convinced that Robbie is a threat to her sister.

In the library, Briony misinterprets Robbie and Cecilia making love as a physical assault. When the disgruntled twins run away, search parties are organized and Briony, searching alone, comes upon Lola being assaulted in the darkness by someone she is convinced is the monstrous Robbie. Briony's imagination sends him to prison. Robbie is released three and a half years later on the condition that he join the British Expeditionary Force in France. Wounded by shrapnel, Robbie and two corporals make their hazardous way to Dunkirk for evacuation. Cecilia's love, expressed in letters that begin while Robbie is in prison, are all that sustains him as infection spreads and his strength flags.

Cecilia has become a nurse and has cut herself off from her family. Briony follows her sister's career path and experiences the rigors of training in the Nightingale tradition. Briony is determined to make amends by recanting her testimony. After treating the first wave of wounded evacuees from Dunkirk, Briony drops in on Lola and Paul Marshall's wedding, then on Cecilia, whom Robbie is visiting. After a tense face off, Briony agrees to reveal everything to the world. This endeavor consumes most of the next six decades of Briony's life and after a 77th birthday celebration and diagnosis with vascular dementia, Briony realizes the story will have to be published posthumously. She contemplates how her readers will want a happy ending and she does not show Robbie dying on the beach of septicemia and Cecilia being killed in the bombing of London. Having done her best to atone, Briony is tired and needs to sleep.

More summaries and resources for teaching or studying Atonement.