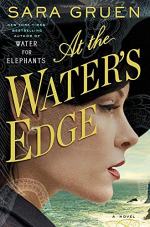 At the Water's Edge Summary & Study Guide includes comprehensive information and analysis to help you understand the book. This study guide contains the following sections:

This detailed literature summary also contains Quotes and a Free Quiz on At the Water's Edge by Sara Gruen.

As “The Water's Edge” opens, Maddie is at a party with her husband Ellis and their best friend, Hank. They all drink too much and act outrageously, though Maddie and Ellis don't realize the full extent of their actions until they sober up the following day.

Ellis and Maddie are both from wealthy families and they feel a sense of entitlement that makes them unable to take care of themselves, even on a very basic level. They live with Ellis's parents and are completely dependent on Ellis's allowance. World War II is in full swing. Ellis claims to have tried to join the military twice, but claims to be color blind. It's a lie that Maddie doesn't discover until very late in the war. Hank has also been rejected because of his flat feet. Maddie comes to suspect that he has also manufactured his condition as a means of avoiding the draft.

Ellis's father took a photo of the Loch Ness Monster and was famous for awhile. Critics later called it a fake and the subject was a sore spot with the family. The day after the disastrous party, Maddis and Ellis argue with his parents. At the end of the argument, Ellis brings up the photo and his father is furious. Maddie and Ellis are banished and they move to a tiny apartment, the best they can afford on their limited resources.

Ellis reveals that he actually believes his father. He and Hank have talked about going to Scotland to search for the monster and Hank manages to make the arrangements, despite the war. The trip is brutal for Maddie and she's ill for days after they finally arrive at an inn near the loch.

The marriage between Maddie and Ellis has never been very solid and their relationship deteriorates as Ellis drinks too much and is often unkind. Maddie begins to see that she's led a sheltered life and she becomes friends with two girls who work hard in the inn where Maddie is staying. Maddie spends some time with Ellis and Hank as they watch for the monster, filming every disturbance on the water's surface. One day, she overhears Hand and Ellis talking, and she realizes that the two men had flipped a coin to decide which of them was going to marry her.

Maddie is unbearably hurt and realizes that her marriage is nothing but a sham. She's relieved when Hank and Ellis are gone for almost two weeks and begins to think that they aren't coming back at all. She pitches in, helping with the cleaning and work at the tavern, and she begins to fall in love with the man who's in charge of the inn. His name is Angus Grant and Maddie eventually realizes that she's seen his name on a tombstone in the local grave yard. She learns that he'd had a wife, Mairi, while he was serving in the war. His wife gave birth to a stillborn daughter and just days later received news that Angus had died. In her grief, she walked into the loch and drowned.

Maddie comes to believe that she has Mairi's blessing for a relationship with Angus but she knows Ellis is a danger to them. Ellis tries to get Angus in trouble with the local police but fails. Maddie knows that Ellis is planning to have her committed to a mental institution where she's to be lobotomized. A showdown is inevitable and it occurs at the loch. Ellis tries to drown Maddie while Hank is filming the monster. Angus intervenes and saves Maddie. She still fears Ellis until a local policeman, planning to arrest Ellis for attempted murder, finds him drowned at the edge of the loch. Maddie and Angus marry and live happy lives.

At the Water's Edge from BookRags. (c)2022 BookRags, Inc. All rights reserved.