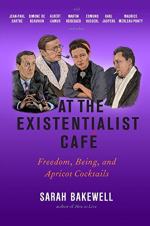 At the Existentialist Caf Summary & Study Guide includes comprehensive information and analysis to help you understand the book. This study guide contains the following sections:

This detailed literature summary also contains Topics for Discussion on At the Existentialist Caf by Sarah Bakewell.

The following version of this book was used to create the guide: Bakewell, Sarah. At The Existentialist Cafe: Freedom, Being, and Apricot Cocktails. Other Press, 2016.

Bakewell’s non-fiction book consists of fourteen chapters detailing the lives of prominent existentialists in the movement as a whole. She writes mainly in the third person, but occasionally switches to first person to explain her own experience with existentialism.

The story begins with three of the most influential existential thinkers sitting at a Parisian bar. Jean-Paul Sartre, Simone de Beauvoir, and Raymond Aron are discussing a new, German school of thought named phenomenology. Within philosophy, it can be classified as practical philosophy, in that its purpose is for application in daily life rather than anything pedantic. Phenomenology is a method of practicing philosophical thinking in which one aims to describe experiences and phenomena.

Though Edmund Husserl was the man who founds phenomenology in a German college town named Freiburg, his favorite student, Martin Heidegger, was arguably the one who contributes more to the field. The two later split in their schools of thought— Husserl chose to focus on the abstract and idealistic aspects of existence, while Heidegger focused on deep analysis of the commonplace aspects of existence.

Much of the existentialist and phenomenological movement occurs during wartime, starting with the rise of the National Socialist Party in Germany. Heidegger begins to support this party, also known at the Nazi party, against Communist ideology. This involvement quickly destroys many of his friendships, and even as he publicly resigns from the party, he remains loyal to it.

Sartre spends some time in Berlin studying phenomenology. From then on, French thinkers are able to adopt phenomenology, and reshape it into another exciting field focused on freedom of choice, human experience, and authentic existence— existentialism. Sartre’s version of existentialism includes discus

Bakewell’s own discovery of existentialism comes by way of Sartre’s novel, Nausea. This is a story about a man who loses his love for life. Without any family or friends, the man realizes that the events of his life are connected, but the connections are not necessary the way that connections in other people’s lives are. He listens to piano music at his favorite cafe, feeling hopeless, before suddenly realizing that the connections between each note of the song are necessary. Thus, art has brought order and necessity to the chaos of his life.

Beauvoir, Sartre’s lover and best friend, also writes a number of fictional works. While his works focus heavily on freedom and anxiety stemming from endless freedom, her works focus on desire and emotions.

Before Beauvoir and Sartre’s open relationship, Beauvoir crushes on a man named Maurice Merleau-Ponty. She soon grows tired of his pleasant demeanor and the way he is at peace with the world around him, and chooses to be with the violently opinionated Sartre instead. Rather than being complacent or kind, Sartre constantly rebels against everything he perceives. This is, perhaps, a product of his being bullied as a child.

Even as the war progresses, existentialists are able to continue shifting their ways of thinking. Sartre grows enamored with the entanglement between individual freedom and historical movements. Due to eye problems, he is not sent to fight on the front lines but is posted at a weather station instead. He uses his long hours of free time to write and think. When Hitler’s advances threaten the storage of Husserl’s philosophical manuscripts, many characters work together in order to preserve the papers for future philosophers.

After the end of war, many existentialist philosophers believe in their obligation to write about their political beliefs. However, these political differences quickly sever a number of philosophers’ friendships. Sartre and Aron disagree over Charles de Gaulle. Sartre attacks Camus for believing in rebellion, though Camus’s picture of rebellion differs sharply from that of a Communist utopia. Sartre criticizes Merleau-Ponty for being too much of a cozy insider in French society. At this time, Sartre’s intense tendency toward extremist viewpoints also brings him to fetishize violence.

Heidegger moves from writing on freedom in being and begins to writing about devastation, as well as what it means to be human. Many of his followers desert him at this time, but Sartre chooses to meet with him to converse. However, their conversation is awkward and unproductive.

Beauvoir writes her autobiographical work The Second Sex. Though there is a conservative backlash at first, this work ends up reshaping feminist thought. She argues that women are taught to see themselves from the perspectives of men, and this holds women back from success and happiness. In this work, she also examines the relationship between situational factors and authentic freedom.

Each of these prominent philosophers eventually passes away, but Bakewell argues that their ways of thinking are still relevant in modern times. With the increase in technological progress, artificial intelligence, and statistics, people today focus too little on freedom and too much on situations.

At the Existentialist Café from BookRags. (c)2022 BookRags, Inc. All rights reserved.