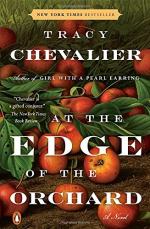 At the Edge of the Orchard Summary & Study Guide

Tracy Chevalier
This Study Guide consists of approximately 57 pages of chapter summaries, quotes, character analysis, themes, and more - everything you need to sharpen your knowledge of At the Edge of the Orchard.

At the Edge of the Orchard Summary & Study Guide Description

At the Edge of the Orchard Summary & Study Guide includes comprehensive information and analysis to help you understand the book. This study guide contains the following sections:

This detailed literature summary also contains Quotes and a Free Quiz on At the Edge of the Orchard by Tracy Chevalier.

NOTE: The following version of the book was used to make this Study Guide: Chevalier, Tracy. At the Edge of the Orchard. Penguin Random House LLC, New York, 2016. Kindle AZW file.

Sadie and James Goodenough married and began their family in Connecticut, but the family farm was not large enough to support the extended family and James wound up being the brother to leave. He and Sadie moved west and were literally stuck when they reached Black Swamp, Ohio. Without the will or the ability to traverse any more of the muddy terrain, they settled on a farm and began to eke out a living.

By the spring of 1838, they have buried five of their 10 children. The remaining children include two older boys, Caleb and Nathan, and three younger children, Sal, Margaret, and Robert. Sadie hates their lives there and has become vindictive to the point of hating everything and everyone. She turns to alcohol for comfort, made from some of the family's apple trees. James loves the apple trees and the orchard has become his method of coping with his harsh, disappointing life. He is prone to violence and often beats Sadie and even the children.

There are no kindnesses between Sadie and James, and James constantly fears that Sadie will harm the apple orchard. Robert has learned to graft from spending time with James, and one day James finds a graft on a wild apple tree. Days later, the family goes to the nearby town where they buy supplies and attend the camp meeting. Sadie becomes drunk and has sex with a random man. James finds them in the midst of the act, and he packs up the wagon to return home, planning to leave Sadie behind. After a brief conversation with Robert and Sal, James fears that Sadie might stumble across Robert's grafted tree on her way home, and he knows she will probably destroy it if she finds it. He takes her home with him rather than run that risk.

By fall, the family has endured a bout of swamp fever. When they are back on their feet, James, Robert, and Martha harvest the Golden Pippins. Sadie rushes to the orchard with an ax, intent on destroying the trees. She does not know exactly why, except that the trees have come to represent her harsh life in the swamp and that the family might be free to leave if the trees were gone. As she swings the ax, James steps in the way, intent only on saving his tree. Sadie delivers a mortal blow with the ax. She walks toward James who kicks at her, knocking her onto one of the stakes from the orchard fence. She is impaled, and with her dying breath, she tells Robert that he should leave the swamp, that James is not his father, and that he should not take his sister because she will only slow him down.

Robert runs away, generally westward, and winds up in California where he meets William Lobb, a plant collector who sends seeds and seedlings to England. Robert soon becomes William's right hand. Meanwhile, Robert also reconnects with a former lover, Molly Jones. Martha's life continues to be harsh. She is raped by a neighbor and later by her own brother, who fathers the child she is carrying when she learns that Robert is in California. She reaches Robert just as Molly announces that she is also carrying a child, and that it is likely Robert's.

Martha dies shortly after giving birth to a son and Molly takes over the baby's care, nursing it when Robert had come to fear that the baby might die. Molly soon gives birth to a daughter. Robert discovers that he is going to have to make a trip to England just an hour before he has to leave. Molly makes him take time to realize that he does not have to spend his life reacting to situations, including running from his childhood memories. Robert realizes that he does want Molly and the babies to accompany him, and they set out for England with Molly teaching Robert that life can be exciting and fun.

More summaries and resources for teaching or studying At the Edge of the Orchard.

At the Edge of the Orchard from BookRags. (c)2022 BookRags, Inc. All rights reserved.