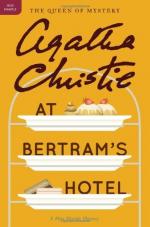 Agatha Christie
This Study Guide consists of approximately 30 pages of chapter summaries, quotes, character analysis, themes, and more - everything you need to sharpen your knowledge of At Bertram's Hotel.

This detailed literature summary also contains Topics for Discussion and a Free Quiz on At Bertram's Hotel by Agatha Christie.

At Bertram's Hotel is a novel by famed mystery author, Agatha Christie. This novel features one of Ms. Christie's beloved characters, Miss Jane Marple. Miss Marple is staying at a London hotel, Bertram's, as a gift from a niece. While there, Miss Marple begins noticing unusual things involving the staff and guests, especially the notorious Lady Bess Sedgwick. At the same time, Chief Inspector Davy is investigating several brazen robberies that seem to include a small connection to Bertram's. As the two detectives compare notes, it soon becomes clear that Bertram's is a front for a large criminal syndicate. At Bertram's Hotel is another fast paced, well plotted novel by one of the world's best mystery writers that will leave the reader guessing who done it until the end.

Miss Marple arrives at Bertram's Hotel in London and meets an old acquaintance in the lobby. As the two ladies catch up, Miss Marple notices how often her friend mistakes guests walking through the hotel for other people. Miss Marple puts this down to old age. At this same time, Miss Marple and her friend watch as the notorious Lady Bess Sedgwick enters the hotel. Miss Marple is aware of Lady Sedgwick from multiple newspaper articles that have discussed Lady Sedgwick's escapades over the years. Lady Sedgwick appears to enjoy scandal, having left her husband for another man years before, and indulging in such behavior as working with the resistance during the war, flying airplanes, and driving fast cars. The latest rumors have Lady Sedgwick involved with a famous race car driver.

As Miss Marple is enjoying her vacation, the police are looking into several daring robberies that have taken place in and around London over the past year or so. Chief Inspector Davy attends a meeting in which all the detectives on the various cases compare notes. Chief Inspector Davy, or Father as everyone calls him, notices a connection between several persons seen near the robberies and Bertram's Hotel. When, a few days later, a guest of Bertram's is reported missing, Father takes advantage of the situation to do some nosing around the hotel. Father speaks to the manager and desk clerk, as well as several guests, attempting to learn all he can about the hotel and the missing guest. Miss Marple is able to tell Father that she saw the missing man leave his room in the middle of the night the day he went missing.

Father continues his investigation, learning that two known criminals, brothers, are the true owners of the hotel. Father also investigates the backgrounds of the employees and learns several of them have criminal pasts while others are actors. A theory begins to form in Father's mind, so he returns to the hotel to do some more snooping. Father speaks to Miss Marple again and she tells him about the conversation she overheard between Elvira and Mr. Malinowski. As they speak, they both hear gunshots out in front of the hotel. Father rushes outside to find Elvira screaming for help and the commissionaire dead. Elvira claims that someone has tried to kill her and that this is the third time it has happened.

Elvira settles into a suite at Bertram's with her mother, Lady Bess Sedgwick, while Father continues to investigate the hotel as well as the murder. Father asks both Miss Marple and the missing guest, who has since turned up, to reenact the night the man disappeared. Miss Marple looks out into the hallway much as she did that night as the man, Canon Pennyfather, walks away much the way she claims to have seen him do that night. However, Miss Marple is convinced the man she saw, although he looked like Pennyfather, was not him. Father agrees, suggesting that someone was pretending to be Pennyfather in order to participate in a train robbery that very night.

More summaries and resources for teaching or studying At Bertram's Hotel.