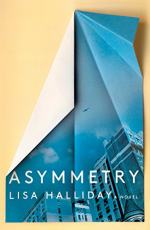 This detailed literature summary also contains Quotes and a Free Quiz on Asymmetry by Lisa Halliday.

The following version of this book was used to create this study guide: Lisa Halliday. Asymmetry. Simon & Schuster 2018. Hardcover.

The first section of the novel, “Folly,” begins with a meeting in a New York City park between Alice, a 25-year-old editorial assistant, and Ezra Blazer, a famous and critically acclaimed novelist in his seventies. Ezra asked Alice, “Are you game?” (5), and the two swiftly began an unconventional and tender romantic relationship whose duration spans the section. Alice came to Ezra’s apartment, where they spent much of their time together, but she rarely spent the night. Ezra gave her books to read, among other odd gifts, and they watched baseball together and talked about literature. Ezra regularly went out to an island in the country to write and eventually invited Alice to visit him there. One day, on a walk, Alice confessed to him that she was doing some writing of her own. When he asked whether she wrote about their relationship, she said she did not, and that she would rather write about people “more interesting” (70) than she was.

As their relationship grew closer Alice began to wonder about how it fit into the course and direction of her life. Ezra was in declining health, in need of regular medical attention, and frequently physically dependent on Alice. When Alice visited Ezra on the island one weekend, Ezra’s former longtime partner, Eileen, also visited, with her husband and two young children. Alice returned to the city and was called for jury duty. One evening shortly afterward Ezra called her and told him he was having chest pains, and she accompanied him to the emergency room. After going back to his apartment to fetch his pills, she told him that she did not think she could continue their relationship, and he asked her not to leave him. Although the conversation (and section) ends there, Halliday implies later in the novel that Alice does leave Ezra.

The novel’s second section, “Madness,” begins with the detention by immigration authorities of an Iraqi-American practical economist named Amar Jaafali at London’s Heathrow Airport in 2008. Amar was on his way to visit his brother, Sami, in Kurdistan, and had planned to stop in London to visit friends there for a couple of days, including a foreign war correspondent named Alastair Blunt. He has just finished his dissertation at the University of California at Los Angeles.

The action of Amar’s detention is interchanged with his recollections of his childhood and early adulthood. Amar was born on a plane on its way from Baghdad to New York City, where his family was immigrating so his father could work as a doctor there. The family lived in Brooklyn’s Bay Ridge neighborhood, but Amar’s brother eventually returned to Iraq, where he married a woman named Zahra and moved to the Kurdistan region. Amar attended college planning to go to medical school. His college girlfriend, Maddie, started as an actress but ultimately decided to attend medical school as well and was accepted to one in New York City. Amar and Maddie lived together in Manhattan for a summer after they graduated before Amar moved to London, where he worked an internship at a bioethics firm and volunteered at a local children’s hospital. He and Maddie eventually ended their relationship.

Amar visited Iraq frequently with his family members over the years and noticed significant changes in the country after the 2003 U.S. invasion. His uncle, Zaid, was kidnapped and murdered, and as the section concludes we learn that Amar’s brother, Sami, had also been kidnapped, which was the reason for Amar’s trip to Iraq.

The third section of the novel – “Ezra Blazer’s Desert Island Discs” – consists entirely of a transcript of a recording of a BBC interview with Ezra Blazer for its “Desert Island Discs” series, in which guests choose their favorite musical recordings, which are played between their responses to interview questions. In the interview Ezra reflects on his life and work, and the transcript ends with him asking the female interviewer on a date, posing the same question to her that he did to Alice in the novel’s first section: “Are you game?” (271).