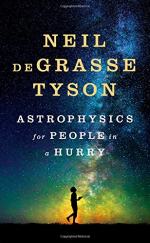 Astrophysics For People in a Hurry Summary & Study Guide

Neil DeGrasse Tyson
This Study Guide consists of approximately 59 pages of chapter summaries, quotes, character analysis, themes, and more - everything you need to sharpen your knowledge of Astrophysics For People in a Hurry.

Astrophysics For People in a Hurry Summary & Study Guide Description

Astrophysics For People in a Hurry Summary & Study Guide includes comprehensive information and analysis to help you understand the book. This study guide contains the following sections:

This detailed literature summary also contains Topics for Discussion on Astrophysics For People in a Hurry by Neil DeGrasse Tyson.

The following version of this book was used to create this guide: deGrasse Tyson, Neil. Astrophysics for People in a Hurry. W.W. Norton & Company, 2017.

An astrophysicist by training but an energetic, effective communicator by nature, Neil deGrasse Tyson offers a brief introduction into the origin and evolution of the universe with Astrophysics for a People in a Hurry. Compacting the entirety of the universe into a mere two-hundred pages requires Tyson to move swiftly through his analysis, often employing wit, anecdotes, and science-fiction references to maintain his upbeat pace. His goal through this book is as astronomically large as the cosmos itself: to create a scientifically literate population. Speaking directly to the reader in his preface, Tyson admits, “If I’ve succeeded, you’ll be culturally conversant in my field of expertise, and you just may be hungry for more” (12).

To instill this hunger in his audience, Tyson tackles some of the largest ideas, physically and conceptually, in the astrophysicist’s realm, beginning with the big bang nearly fourteen million years ago. So crucial is this moment in space and time that Tyson devotes the first ten pages to the first second in the universe’s existence. From there, Tyson begins to explain some of the universal laws that shape modern science, such as the conservation laws, the speed of light, and general relativity. Tyson continues to weave scientific principles and theories into specific astrophysical areas of study to create a comprehensive picture of where his field fits among the sciences. Tyson discusses what exists between the planets, and between the galaxies, all while offering fantastical postulations about what lifeforms may exist in the void of space. He offers less detail about relatively better-known phenomenon, like black holes and exploding stars, instead focusing heavily on the prevalence of dark matter and dark energy throughout the universe. These amazingly complex concepts account for a vast majority of the mass-energy in the universe, yet we know little about them except for their existence. In other words, even experts like Tyson have no idea what makes up most of the universe.

While a balance of information and comic relief dominate most of the book, Tyson pays careful consideration to the contributions of others to modern scientific understanding. This book includes credits to some of history’s most recognizable scientific figures like Isaac Newton and Albert Einstein, heroes well-known within the scientific community like Vera Rubin and Edwin Hubble, and lesser-known contributors like Tyson’s own graduate physics professor John Archibald Wheeler. These people, along with several others throughout the book, are instrumental to the modern understanding of the cosmos, and Tyson has no qualms paying credit where credit is due. And while Tyson makes a habit of interjecting his own postulations and opinions, he clearly separates fact from hypothesis. The size of this book makes it hard to provide much detail on any one person or concept, which is presumably how Tyson gets his reader hungry for more.

With a swift pace, upbeat tone, and the ability to condense astronomical issues into digestible prose, Tyson packs more than merely astrophysics into his analysis with his thoughtful conclusion aimed at the possibilities science offers mankind. If mankind, especially those in power, could adapt to what Tyson calls the “cosmic perspective,” then “our problems would shrink- or never arise at all- and we could celebrate our earthly differences while shunning the behavior of our predecessors who slaughtered one another because of them” (197). Always centering his more-political statements with scientific basis and a common sense-based approach, Tyson offers a non-polarizing look at the practical benefits an understanding of science can bring to the world. With this book, and the hopeful hunger instilled because of it, Tyson seeks to better the world with an army of scientifically literate, curious, unified, conscious human beings.

More summaries and resources for teaching or studying Astrophysics For People in a Hurry.

Astrophysics For People in a Hurry from BookRags. (c)2022 BookRags, Inc. All rights reserved.