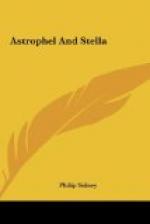 This detailed literature summary also contains Quotes and a Free Quiz on Astrophel and Stella by .

The following version of this book was used to create this guide: Sidney, Philip. The Major Works. Oxford, 2002.

Philip Sidney's sonnet sequence Astrophel and Stella follows a lose narrative rife with intimate drama between Astrophel, the speaker of the majority of the sonnets, and Stella, his unattainable Beloved. The early sonnets in the sequence delineate Astrophel's anxiety over embarking on a poetic project that many have already mastered, yet he proceeds to tell the story of the first time he saw Stella, what she looked like, and how he fell in love with her.

After providing the reader with a general outline of the past, the speaker moves into describing his present state, which is one of melancholy and despair. Suffering from the unrequited love of Stella, Astrophel obsesses over her physical beauty (especially her dark eyes), her voice, and her ability to make any sour situation palatable. Nevertheless, he continues to speak about the Beloved from a distance, acknowledging that any interaction between them is mere fantasy that overwhelms his mind from day to day.

As the sonnets progress, they become increasingly more intimate and the reader begins to notice that Stella - at once a distant object of Astrophel's attention - is moving closer to the speaker. Some sort of relationship or bond is formed between the two (the sonnets are too vague to know the exact details of their relationship) and it is suggested that they share a secret kiss in the garden outside her home. After the kiss, Astrophel is elated with love and writes a series of sonnets detailing the wonders of bliss and the joy of having found such romantic fulfillment after so much sadness.

However, just as Astrophel is sure he has won Stella over, she rejects him once more, this time for good. Astrophel is devastated and takes his feelings out both on his poetry and on his Beloved, writing a series of songs that blame Stella for her malicious manipulation and attempt to cope with the new realization that he will remain lonely. The later sonnets, written primarily about absence, raise questions of how to keep on living and writing once one has been abandoned by his only love.

The end of the sequence sees the "death" of Stella, and it s not clear whether Sidney means to imply a real death or a metaphorical one, in which the relationship Astrophel so badly longed for is rendered impossible. Either way, Sidney's speaker ends up in much the same position as he started: alone, melancholy, and still idealizing the unattainable woman of his youth.