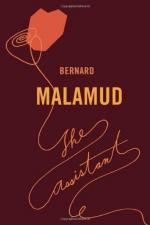 Bernard Malamud
This Study Guide consists of approximately 45 pages of chapter summaries, quotes, character analysis, themes, and more - everything you need to sharpen your knowledge of The Assistant.

The Assistant Summary & Study Guide includes comprehensive information and analysis to help you understand the book. This study guide contains the following sections:

This detailed literature summary also contains Further Study and a Free Quiz on The Assistant by Bernard Malamud.

The Assistant is a morality drama in which human kindness and honesty, despite appearance, triumph over callousness and greed and transform lives. Morris Bober and his family live in poverty because he refuses to exploit his equally impoverished neighbors. Honesty and morality prevent the realization of the American Dream for him and his family. An attempted robbery at his store acts as a catalyst in forging a surprising working relationship and friendship that transforms the arrogant and antiSemitic attitude of a petty thief, who learns to respect the Jewish values of integrity, honesty, and the redemptive power of suffering.

More summaries and resources for teaching or studying The Assistant.

The Assistant from BookRags. (c)2021 BookRags, Inc. All rights reserved.