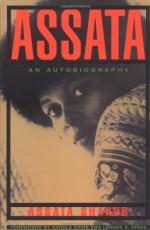 Assata Shakur
This Study Guide consists of approximately 28 pages of chapter summaries, quotes, character analysis, themes, and more - everything you need to sharpen your knowledge of Assata.

This detailed literature summary also contains Topics for Discussion on Assata: An Autobiography by Assata Shakur.

This book is an autobiography of Assata Shakur, a black revolutionary who is now living in Cuba where she has political asylum. The book tells the often shocking, yet inspiring, story of Assata's life up to her arrest and eventual escape to Cuba.

Assata, was born and named JoAnne in New York City and spent many years of her life living in New York City or in segregated North Carolina with her grandparents. She was raised to be respectful of those who respected her and to always love herself. This lesson helped her through the many difficulties she encountered as a black woman in a racist American culture. She, along with many other minorities, was brainwashed into believing she was worth less due to the color of her skin and other African features. This led to an initial hatred and distrust of all white people. These feelings of inadequacy and the arguments she had with her mother led to several dangerous run-away incidences in which she quickly became aware of the dark side of American life. Fortunately, she had a loving family who took her back in and helped to get her on a safer path.

Upon entering college, Assata became involved with various student organizations aimed at improving the college experience for black students. This involvement is the start of her interest in and involvement in improving life for African Americans and other minority groups. She realized that she had changed a great deal over the years and decided to change her name to one that truly represented who she was. She chose an African name, Assata, which means love for the people. After college and a failed marriage, she spent time in San Francisco and Berkeley studying the Black Panther Party and learning about the oppression of other groups of people. When she returned to New York, she was enthusiastic about joining the Black Panthers. This enthusiasm did wain at times, due to the arrogance of some of the BPP leaders. Finally, when her trust in the Party was at an all-time low, she decided it was time to leave the Party.

Life became more strange after leaving the Party. Her home was bugged and she knew she was being watched. After two police officers were shot and killed, she learned she was wanted for questioning. She decided to lay low and go into hiding. After several years in hiding, she finally was caught on the New Jersey Turnpike in a shoot-out. Severely wounded, she was taken to a hospital under police surveillance; she was being charged with many felonies, felonies of which Assata claims she was innocent.

Half of the book is spent giving the details of Assata's various charges and trials, acquittals, and a final conviction. She spent time in a maximum security prison in West Virginia before being brought back to New Jersey. Her relationship with her family and her daughter, who she had had while in prison, was deteriorating. She decided it was time to leave. Her grandmother's dream that she would not be in prison much longer encouraged her to escape.

The book ends with Assata in political asylum in Cuba. She compares the Cuban culture, which she describes as friendly, safe, and non-racist, to the American culture she had known and despised. The final scene is of Assata being visited by her aunt, grandmother, mother, and daughter. She has a positive outlook now on life and hope for the freedom of her people.

More summaries and resources for teaching or studying Assata: An Autobiography.