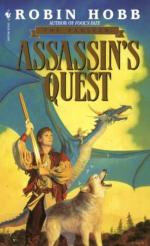 Robin Hobb
This Study Guide consists of approximately 40 pages of chapter summaries, quotes, character analysis, themes, and more - everything you need to sharpen your knowledge of Assassin's Quest.

This detailed literature summary also contains Topics for Discussion and a Free Quiz on Assassin's Quest by Robin Hobb.

Assassin's Quest is a novel by Robin Hobb that continues the stories of the Farseer family, this time concentrating on the life of FitzChivalry, the bastard son of Chivalry. FitzChivalry was trained as an assassin for the royal family of the Six Duchies, in a land where magic is common. The magic of Skill is the ability to see into other minds and to use that ability to influence others and travel outside one's own body to other places. The magic of Wit-sense is the ability to mind-meld with a specific animal for life, and to sense pain and emotions from all other animals as well. The hero, FitzChivalry, has both magic abilities, but no training in either.

The story begins with an old man in a cottage, writing down his memories. It is Fitz, the hero of our story, in his elder years. The story is of his life after he had been raised from the dead by Burrich and Chade. Before he was captured by Regal, Fitz was an assassin for King Shrewd, but the Skill has been used against him. He chose to poison himself into a deep sleep and be buried as dead while his Wit-bound animal, a wolf named Nighteyes holds his soul for him. Fitz slowly recovers under care of the Wolf, Chade and Burrich. Fitz becomes restless and as he becomes human again he realizes he is dead to all those who meant anything to him, he is still Skill-linked with Verity, the missing King, and he is full of anger at Regal, the man who has claimed the throne of the Six Duchies falsely.

Fitz breaks his ties with Burrich and Chade and begins preparing for his trip, but is delayed. When his home is attacked by Forged Ones, strange Zombies sent by the Red Ships, Fitz and Nighteyes fight them off. Burrich arrives at the house soon after, and assumes that one of the Forged Ones, who has taken one of Fitz' shirts, is actually Fitz and he is dead. Through Fitz's ability to Skill, he follows Burrich in his new life as protector and eventually the husband of the mother of Fitz's child, Molly. Fitz sets out with Nighteyes to seek out Regal and kill him.

Nighteyes and Fitz encounter many people and many adventures in their journey. For a time, Nighteyes joins with a wild pack of wolves and is apart from Fitz. Fitz makes an unsuccessful attempt to kill Regal, and Verity commands Fitz to come to him. Fitz is unable to resist, and joins caravans and pilgrims to move through the Six Duchies and find Verity in the mountains. Fitz is wounded and brought to the home of Fool, who is a man from Fitz's past, who now says they are destined to work together to bring about some change to the world. Fitz joins Verity's Queen, a minstrel, a strange old woman and the Fool to seek out Verity.

The Six Duchies are under siege from mindless and ruthless warriors of the Red Ships. Regal has abandoned everything except his desire to find Verity and the stone dragons. As they climb higher and higher in the mountains, Fitz is plagued by dreams of Verity, and his mind is under constant assault by Regal through one of his Skillmasters, Will. Will, Carrod and Burl are a coterie that seek Fitz and Verity, and all who are with them. The band of seekers walk through a mysterious garden of stone dragons and other flying beasts, and Fitz thinks he can feel something from them. They find Verity, but he is almost insane with a desire to carve a huge dragon from the stone in the quarry at the end of the Skill Road.

At the quarry, Verity joins with Kettle to create an Elderling, a mythical creature that kings of ancient times have brought forth from the stone to help them defeat the Red Ships in the past. Just as the armies of Regal are about to destroy them, Verity and Kettle forge their dragon with their lives. The Queen and the minstrel and the Fool all fly away to fight the Red Ships, and Fitz and Nighteyes are left to fight the army. The Wit-bound team somehow activate all the other dragons in the stone garden and the dragons eat the entire army in their hunger. The dragons fly back to Buck, join Verity's dragon and fight off the enemies. Fitz is able to reach Regal's mind through the dying body of Will, and change him to be a good man again. Regal brings his armies back to Buck and he swears loyalty to the Queen's unborn child.

Fitz and Nighteyes travel the land, but finally settle down near the coast of Buck, and decide to live out their lives there, as Fitz becomes a scribe and tells the story.

More summaries and resources for teaching or studying Assassin's Quest.