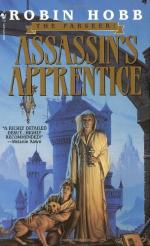 Robin Hobb
This Study Guide consists of approximately 41 pages of chapter summaries, quotes, character analysis, themes, and more - everything you need to sharpen your knowledge of Assassin's Apprentice.

This detailed literature summary also contains Topics for Discussion and a Free Quiz on Assassin's Apprentice by Robin Hobb.

Fitz's life takes a series of twists and turns as he struggles to find his place in the world. As the illegitimate son of a prince, the royal family does not recognize Fitz. When Chivalry abdicates his right to the throne and move to a far outpost, the townsfolk view Fitz as the reason they have lost a favored ruler. Fitz also finds opposition within the palace walls from the Queen and Chivalry's youngest brother, Regal. Fortunately, King Shrewd halts Queen Desire and Regal in their wish to dispose of the boy. The king sees an opportunity in the boy and proposes to succor him within the royal household in order to keep Fitz from becoming a usurper to the throne.

As part of his care under Shrewd's watchful eye Fitz receives lessons in horsemanship, swordsmanship, and eventually becomes apprentice to Chade, the royal assassin. Fitz enjoys these duties, particularly the time spent around the stables. Fitz exhibits an uncanny ability to communicate telepathically with animals. He naturally forms close bonds quickly with animals and utilizes his skill to his advantage several times throughout the story. Fitz also finds pleasure in brief excursions to the nearby town of Buckkeep to fetch supplies for Chade or the royal scribe, Fedwren. Once the excitement over the boy's existence subsides, Fitz finds the town a fascinating place. He makes friends there and is intrigued by the various items he is sent to bring back to the keep.

Because of his status as the illegitimate son of King Shrewd's oldest heir Fitz is unable to avoid becoming involved in political affairs. Fitz accompanies Princes Verity and Regal when they travel to discuss politics in neighboring towns. Most often, his role is to gather information and report to Chade, but there is always the additional responsibility that if he uncovers any suspicious activity he is to assassinate whoever is causing the problem. Fitz must decide for himself at each juncture which course of action will prove most profitable; whether to obey orders or handle the situation on his own and risk his own life.

The story is about Fitz's struggle to find a place to belong. This first book in the trilogy presents only a brief section of Fitz's life at Buckkeep and introduces many loose ends that puzzle the reader. Like Fitz the reader must weigh each event and decide whose side they are on and what course of action they would choose.

More summaries and resources for teaching or studying Assassin's Apprentice.