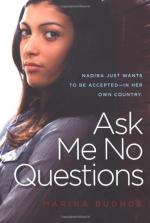 Marina Tamar Budhos
This Study Guide consists of approximately 55 pages of chapter summaries, quotes, character analysis, themes, and more - everything you need to sharpen your knowledge of Ask Me No Questions.

Ask Me No Questions Summary & Study Guide includes comprehensive information and analysis to help you understand the book. This study guide contains the following sections:

This detailed literature summary also contains Topics for Discussion and a Free Quiz on Ask Me No Questions by Marina Tamar Budhos.

"Ask Me No Questions" by Marina Budhos is the story of a family of illegal Bangladeshi immigrants and the trials they face in America after the tragedy of 9/11. When Abba is detained by the INS for violating his visa, Nadira and Aisha attempt to save their father as they struggled with the daily challenges of finding their place in a country they now realize is not their home. "Ask Me No Questions" is a heartrending tale of the horrors one family is forced to endure after the U. S. tightens immigration regulations following 9/11.

After the Hossains are denied asylum in Canada, Abba is arrested for violating his visa upon their return to America, so he sends Nadira and Aisha back to school in Queens, NY. Aisha tells her younger sister that they are alone now and must work together, but Nadira refuses because she has always been jealous of her perfect sister. Upon their return to school, Mr. Friedlander tells Aisha that he has arranged a college interview at Barnard for her. Uncle scares Nadira by telling her that becoming legal will not make people look at them differently, so when Aisha tells Nadira she is a candidate for valedictorian, Nadira tells her it does not matter since they will not be able to stay in America anyway. Nadira feels guilty for making her sister cry when she learns Abba is being held on suspicion of being involved with an illegal organization because he donated money to a local mosque. When Nadira and Aisha visit their lawyer, Mr. Rashid, he tells them they must wait and see, so Aisha tells Nadira they need to handle it themselves, but Nadira believes this is impossible.

Lonely at school the next day, Nadira realizes Aisha is the only one who can understand and she tells her sister that maybe they can figure it out together. The sisters compose a letter to the head of immigration about how hard Abba works and about how the $3000 that he gave to the mosque was savings for his daughters' college tuition. When the police arrest Uncle for his expired visa, Aisha blames herself for being unable to convince the police to release him, and she becomes even more depressed when no one responds to her letter, beginning to act strange and avoid her friends. Uncle is released, but he tells Taslima about how he was humiliated. Nadira accompanies Aisha to her Barnard interview, and talking to an Asian girl while Aisha is at the interview, Nadira sees herself at college for the first time. Back at school, Mr. Friedlander calls Nadira to the office to tell her that Aisha missed her interview at Barnard, and when Nadira asks Aisha why she did not go to the interview, Aisha admits she was scared; she thinks that maybe they cannot hurt her if she does not want so much.

Learning that Abba's preliminary hearing is coming up, Nadira finds a mistake on his papers, but deciding she needs something bigger to save him, she calls Tareq to buy a fake ID but changes her mind as she recalls how Abba taught her to always choose right. Nadira takes a bus to Burlington and joins Ma for Abba's preliminary hearing in order to show the judge that Abba's name is spelled incorrectly and there is a case of mistaken identity. The judge releases Abba and promises that Immigration will hear the Hossains' final appeal for residency. Aisha helps Taslima run away to marry Tim since Uncle and Auntie are returning to Dhaka.

Abba becomes depressed because he sees no future for his family in America, and agreeing, Aisha throws out her college acceptance letters when the Hossains receive their letter scheduling their residency hearing, saying there is no point since she will not be here. Nadira insists that Aisha needs to make people see her instead of blending in so much, so the girls talk to Mr. Friedlander about everything that has been going on. During her valedictorian speech, Aisha admits she is an illegal immigrant, tells her peers about her family's trials and claims she wants the same thing they want, a future. At the Hossains' final appeal for residency, the judge grants Abba permission to file the paperwork again, guaranteeing it will be processed correctly and accepted this time. Abba, Ma, Nadira, and Aisha go home.

More summaries and resources for teaching or studying Ask Me No Questions.

Ask Me No Questions from BookRags. (c)2022 BookRags, Inc. All rights reserved.