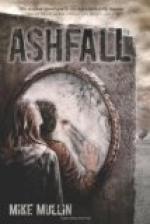 Mike Mullin
This Study Guide consists of approximately 25 pages of chapter summaries, quotes, character analysis, themes, and more - everything you need to sharpen your knowledge of Ashfall.

Yellowstone National Park is the site of the supervolcano which explodes and blankets most of the western half of the United States in more than a foot of sulfuric ash.

Cedar Falls, Iowa, is the town in which Alex and his family live. It is a nice town before the volcano erupts, Alex explains, but the town's people turning on one another and looting makes him sad.

The Edmunds Farm is located in Iowa, and is where Mrs. Edmunds and her daughter, Darla, live. It is the farmstead to which Alex heads following the encounter with Target that nearly leaves him dead. The Edmunds Farm is ultimately burned down by Target.

More summaries and resources for teaching or studying Ashfall.

Ashfall from Gale. ©2005-2006 Thomson Gale, a part of the Thomson Corporation. All rights reserved.