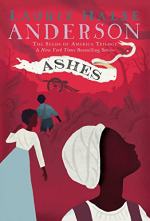 Laurie Halse Anderson
This Study Guide consists of approximately 57 pages of chapter summaries, quotes, character analysis, themes, and more - everything you need to sharpen your knowledge of Ashes.

Once blinded by her concern only for finding and freeing her sister, Isabel Gardener came to realize the meaning of the Revolutionary War in terms of the fight for the freedom of blacks in the novel Ashes by Laurie Halse Anderson when she began working with a group of black Continental soldiers. Isabel and Curzon had searched for five years to find Ruth and sneak her away from the woman who had separated the sisters when their search ended at a North Carolina plantation. Their plans to go to Rhode Island were waylaid when Curzon decided to reenlist with the Continental army, a cause Isabel felt at that time was worthless. As she saw the blacks and whites fighting for one cause together, Isabel realized that freedom for all was a cause worth fighting for.

Isabel and her friend Curzon searched five years to find Ruth, the sister who had been taken from Isabel by their cruel mistress. The located the girl at a plantation in North Carolina where Walter and Serafina, the elderly couple who had taken care of Ruth since she arrived, helped them all escape. They intended to make their way to Rhode Island where they could live as free blacks but were forced to stop at Williamsburg, where the Continental army was encamped in order to get jobs and rest.

Even though Isabel had thought about being Curzon’s wife, the two disagreed about the worth of the Revolutionary War in terms of freedom for blacks. Isabel believed the Patriots were fighting only for freedom from British taxes while Curzon saw the war as a turning point in the fight for black freedom. She believed their friendship was ended when he announced that he was going to reenlist in the army. They agreed to go their separate ways and not both each other again.

The day the army marched out of Williamsburg to begin a siege against the British, Isabel got the sense that the woman for whom she had been working for at a laundry was trying to deceive her. The day before someone had broken into the place where she and Ruth slept and had burnt the free papers Isabel had forged for them. Sensing that she and Ruth were about to be delivered back into slavery, Isabel took Ruth and ran. The only place she could think to go was with the army.

Isabel found Eben, a white sergeant who was a friend of Curzon. Even though Isabel told Eben she did not want Curzon to know about her plight, Eben discovered he had no choice but to see that Isabel and Ruth were cared for by taking them to the company of which Curzon was a member. Eben knew that Isabel and Ruth would be accepted there because Curzon had signed them up as help for the company as his wife and sister. Isabel was confused by the way the soldiers treated her at first and referred to her as Curzon’s wife but she played along. It was only several days later that Curzon was able to tell Isabel how he had signed her up as his wife when he enlisted so she could go along and he could see she was safe. Because they argued, he never told her what he had done.

As the two spent time together in the encampment, their love was rekindled. One day when Isabel was among the women who braved the cannons and mortar shells to deliver food to the soldiers Curzon told her that he loved her. When she next saw him, after he returned from a successful attack on a British redoubt with a bayonet wound, she told him that she loved him. The two later married.

As the American and French troops fought in the battle of Yorktown, Isabel realized that the war she had disdained was a worthy cause. She realized that Curzon had not picked the war over her when he had enlisted, but was a man capable of loving and planning not only on the small scale but also on the large scale. After the British surrendered in the battle of Yorktown, the black people who had supported the British with the promise of being granted their freedom were sent back to their masters. Blacks whose masters could not be found were claimed as the property of Virginia.

Curzon was angry when he saw these blacks being sent back into slavery after they had been promised their freedom. Isabel reminded him that they were sowing the seeds of the country they hoped that America would become. She was happy because she and her sister were free and they were together.

More summaries and resources for teaching or studying Ashes.