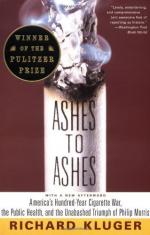 Plot Summary
+Chapters Summary and Analysis
Chapter 1: Adoring the Devil's Breath
Chapter 2: The Earth with a Fence Around It
Chapter 3: It Takes the Hair Right Off Your Bean
Chapter 4: The Golden Age of Malarkey
Chapter 5: "Shall We Just Have a Cigarette on It?"
Chapter 6: The Filter Tip and Other Placebos
Chapter 7: The Anguish of the Russian Count
Chapter 8: Grand Inquisitors
Chapter 9: Marlboro Mirage
Chapter 10: Three-Ton Dog on the Prowl
Chapter 11: Stroking the Sow's Ear
Chapter 11: Stroking the Sow's Ear Analysis
Chapter 12: Let There Be Light
Chapter 13: Breeding a One-Fanged Rattler
Chapter 14: The Heights of Arrogance
Chapter 15: The Calling of Philip Morris
Chapter 16: Of Dragonslayers and Pond Scum
Chapter 17: Chow Lines
Chapter 18: Melancholy Rose
Chapter 19: Smooth Characters
Chapter 20: Blowing Smoke
Free Quiz
Characters
Objects/Places
Themes
Style
Quotes
Topics for Discussion
Order our Ashes to Ashes: America's Hundred-Year Cigarette War, the Public Health, and the Unabashed Triumph of Philip Morris Study Guide

Richard Kluger
This Study Guide consists of approximately 56 pages of chapter summaries, quotes, character analysis, themes, and more - everything you need to sharpen your knowledge of Ashes to Ashes.

This detailed literature summary also contains Topics for Discussion and a Free Quiz on Ashes to Ashes: America's Hundred-Year Cigarette War, the Public Health, and the Unabashed Triumph of Philip Morris by Richard Kluger.

Tobacco was 'discovered' by Columbus, along with the New World. Tobacco quickly became popular and spread throughout the world. The eastern seaboard of America was found to be a fertile ground for growing tobacco. Trends changed when chew and loose tobacco were abandoned for the more convenient cigarette. Several entrepreneurs (notably Buck Duke at American Tobacco and Richard Joshua R.J. Reynolds at R.J. R.J. Reynolds) took advantage of the dawning industrial age to market their products to the masses. Buck Duke was so successful at using American Tobacco Company to buyout and vanquish his competitors that he found his mammoth company broken up by anti-trust regulators. The separate companies began competing against each other, and some prominent leaders emerged: RJ R.J. Reynolds, Philip Morris, Lorillard, Brown & Williamson, and American Tobacco Company. These companies battled over market share throughout the 1930s.

New advertising claims were constantly being made to highlight the differences in the brands. Many new brands were introduced in this time period, including: Camel, Lucky Strike, and Old Gold. Cigarette manufacturers tried to keep on top of social trends by marketing to newly 'liberated' women for the first time. New advertising mediums, such as radio and television, were used to promote products.

Over the years, anecdotal evidence had been building that smoking was harmful. Incidences of lung cancer were almost doubling every ten years. In the 1950s, health researchers began studies that definitively linked smoking with lung cancer. The results were solidified further by the early 1960s. The tobacco companies responded by creating their own media institute, the TIRC, to refute and challenge health claims concerning their products. As a result, the public was often given conflicting information, one side from health advocates and one side from tobacco companies. A slew of 'safer' cigarette products were offered, including filters and low tar cigarettes.

The government became increasingly involved when the U.S. Surgeon General issued his 1964 report, which portrayed smoking as a major health issue. Soon, the tobacco industry was forced to add a warning label to its products. Congress was slow to act, due to the political power held by tobacco growing states. Restrictions came slowly; smoking ads were not banned from television and radio until 1971.

In the 1970s, non-smokers' rights groups began to increase in both popularity and power. Smoking restrictions were passed at state levels. The tobacco industry lobbied hard to stop many initiatives. California spawned the GASP anti-smoking movement, which quickly spread across the nation. Studies showed the dangers of second hand smoke. Separate smoking sections were mandated on planes and trains. Some states altogether banned smoking in public places.

Philip Morris emerged during this time period as the most successful tobacco company in the world. It succeeded in increasing market share around the world, even as American markets shrank, and also succeeded in diversifying into the food industry.

Liability lawsuits against tobacco companies, which had been stifled successfully for more than twenty years, began to have success by the 1990s. Individual states began suing over increased health care costs. The stage was set for the tobacco/state 'tobacco settlement,' which would effectively put an end to the litigation, once and for all.

More summaries and resources for teaching or studying Ashes to Ashes: America's Hundred-Year Cigarette War, the Public Health, and the Unabashed Triumph of Philip Morris.