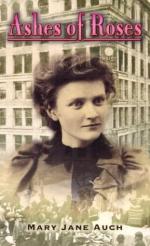 "Ashes of Roses" by Mary Jane Auch tells the tale of an Irish immigrant family that comes to New York with hopes of finding their fortune. Michael Nolan, his wife Margaret, and their four children - Margaret Rose, Maureen, Bridget and Joseph - travel from Limerick to America aboard a ship filled with immigrants. Margaret Rose, the main character, details the trip, comparing their two weeks in steerage to being sardines in a can. It is February and Margaret Rose claims that she has forgotten what the sun looks like. Unable to sleep, Margaret Rose sneaks out of the bunk she shares with Bridget and goes up on deck. The only person there in the gray dawn is the same man that is always up on deck. He points out the Narrows to Margaret Rose and tells her that New York Harbor is right on the other side. Margaret Rose runs back to the sleeping compartment to wake her family and to tell them about the arrival. Margaret Rose is desperate to see the Statue of Liberty. The statue captivates Margaret Rose.

"We had heard many tales of Ellis Island - the place where the immigration officials decided whether or not ye were fit to enter America's gates." (Chapter 2, p. 11).

The medical examinations at Ellis Island are not pleasant. It is learned that Joseph is ill and did not pass the examination. Joseph will not be allowed to enter America. Margaret Rose fears that the trip has been in vain. Michael decides to return to Ireland with the baby and promises to return as soon as he can.

The rest of the family makes their way to Michael's brother Patrick's apartment. Patrick shares the apartment with his wife, Elsa, her daughters and their son. No one but Patrick is happy to see the Nolans. The situation is immediately tense and goes quickly from bad to worse. The situation comes to an abrupt end after Elsa catches the Nolans making paper flowers in her kitchen. She says that running a sweatshop in their apartment has brought shame to the family. The family is asked to leave. Although Patrick offers to pay for new lodgings, Margaret wants to go back to Ireland.

Rose and Maureen badger and beg Margaret to stay in America. Margaret, beaten down, reluctantly agrees. The girls go off on their own and find a place to stay, breaking the promise to return to Patrick's.

The girls rent from Mr. Garoff, a Russian Jew, and his daughter, Gussie. After a terrifying experience with her boss, Rose goes to work at the Triangle Shirtwaist Factory. Rose begins to love life in America.

Not long after Rose and Maureen start to work at the factory, the famous fire breaks out. 146 people are killed in the fire, including Gussie. Rose and Maureen will never be the same. For a brief moment the girls consider returning to Ireland. Then Maureen sums up their decision to stay by saying,

The girls decide to stay. Rose realizes the importance of Gussie's work with the union and decides to take up the work and to move forward.