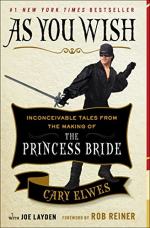 As You Wish Summary & Study Guide

Cary Elwes
This Study Guide consists of approximately 43 pages of chapter summaries, quotes, character analysis, themes, and more - everything you need to sharpen your knowledge of As You Wish.

As You Wish Summary & Study Guide includes comprehensive information and analysis to help you understand the book. This study guide contains the following sections:

This detailed literature summary also contains Topics for Discussion on As You Wish by Cary Elwes.

The following version of the book was used to create this study guide: Elwes, Cary. Layden, Joe. As You Wish. New York: Touchstone, 2014. First Hardcover Edition.

As You Wish chronicles the making of the Princess Bride through the perspective of Cary Elwes, the lead actor on the film. Director Rob Reiner provides the foreword. Reiner writes that The Princess Bride proves nobody in the film industry knows what will work, then praises Elwes’ retelling of the production. The book opens with The Princess Bride’s 25th anniversary celebration. Elwes muses on the film’s cult following and wonders what makes it so special. These passages are written in present tense. The rest of the book is mostly written in past tense. There are a series of brief interviews with prominent cast and crew members interspersed throughout the book.

The narrative flashes back to when Elwes was a fledgling young actor fresh out of acting school. Director Rob Reiner and producer Andrew Scheinman met with Elwes in his hotel room in Germany to offer him the lead role in The Princess Bride. Elwes accepted, astonished and excited. It was the first major Hollywood film of his career. Elwes went to the first costume fitting for his character, Westley/The Man in Black.

Elwes journeyed to the production base in London where he met the cast and crew. When Elwes met Robin Wright, the actress playing Princess Buttercup, he was smitten with her. The cast then had their first table read. Elwes met more co-stars, including the enormous André the Giant. William Goldman, the writer of The Princess Bride, was nervous throughout the production because The Princess Bride was his fondest work. Elwes then began a rigorous fencing regimen to master the choreography necessary for a fight scene between himself and Mandy Patinkin, who played Inigo Montoya. The script called for the greatest sword fight of all time. There was a rivalry between the two.

They began production by shooting the scene with Westley and Buttercup escaping through the Fire Swamp. Elwes gained confidence as he made suggestions that Reiner used while shooting. There were some mishaps, as one of their stuntmen showed up late for a key scene after being arrested the night before. The production went on location to Haddon Hall, a medieval-era estate, to shoot the castle scenes. Elwes got to know André the Giant better. One day, André the Giant farted so loudly on set that the actors could not stop laughing and it caused signifiant delays.

Elwes recalled his time working with Wallace Shawn and Billy Crystal. Shawn, who played Vizzini the Sicilian, was extremely anxious and insecure about his performance. By contrast, Crystal made all the performers laugh during his brief cameo appearance. He kept improvising funny lines, some of which were left in the final product. One day, André the Giant talked Elwes into riding his All-Terrain Vehicle (ATV). Elwes broke his big toe while driving. In agony and unable to perform the day’s physical activity, Elwes nevertheless tried to conceal the injury from the director. Reiner confronted him and Elwes confessed, learning the value of always telling the truth.

Although injured, Elwes kept training for his sword fight with Patinkin. They demonstrated their choreography for Reiner on set. Reiner was disappointed by the run-time. They had mastered the sword fight so well, it was too short. After adding more time to the sequence, a large crowd was impressed with their sword fight when it was shot. Towards the end of the production, Elwes’ grandfather died. He took a day off filming to attend the funeral. The death bore a close parallel to the grandson and grandfather characters in The Princess Bride.

After the film was done shooting, the cast and crew were disappointed with the direction of the marketing team. The film did not perform well at the box office. Nobody quite knew how to categorize The Princess Bride, since it defied easy genre categories. Years later, Elwes was surprised at the burgeoning fandom. VHS sales had inspired a cult following. He recounted several memorable fan encounters, including a fan who claimed the movie saved his life.

Elwes closes the book by theorizing The Princess Bride has endured because it was made with a lot of heart. There is an epilogue by producer Norman Lear, who lauds the film’s cast and crew. His relationship to the film is his proudest achievement.

More summaries and resources for teaching or studying As You Wish.

As You Wish from BookRags. (c)2022 BookRags, Inc. All rights reserved.