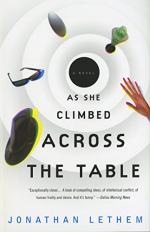 As She Climbed Across the Table Summary & Study Guide

Jonathan Lethem
This Study Guide consists of approximately 34 pages of chapter summaries, quotes, character analysis, themes, and more - everything you need to sharpen your knowledge of As She Climbed Across the Table.

As She Climbed Across the Table Summary & Study Guide Description

As She Climbed Across the Table Summary & Study Guide includes comprehensive information and analysis to help you understand the book. This study guide contains the following sections:

This detailed literature summary also contains Quotes and a Free Quiz on As She Climbed Across the Table by Jonathan Lethem.

The following version of this book was used to create this study guide: Lethem, Jonathan. As She Climbed Across the Table. New York: Random House, 1998.

The novel takes place on the campus of an unnamed university. The protagonist, Philip Engstrand, is a member of the anthropology department; his research specializes in studying interactions between university faculty/departments. He is in a romantic relationship with Alice Coombs a physicist at the university. One day, Professor Soft of the physics department successfully creates an enigmatic new scientific phenomenon called Lack. Lack is an invisible area of space contained within a laboratory. When objects are placed within Lack, Lack sometimes ‘consumes’ the objects and makes them disappear. Alice believes that Lack is showing a preference for certain objects and particles and is therefore demonstrating intelligence. Alice is fascinated with Lack and even begins to fall in love with it. She begins to emotionally withdraw from Philip.

Alice eventually moves out of the apartment that she and Philip share. Two blind men—Garth and Evan—move in as Philip’s new roommates. Garth and Evan are good friends and are extremely codependent on each other. They often talk about matters of time and space, and Garth appears obsessed with the idea that reality inherently depends on perception. Alice and the other scientists continue to study Lack intensely. Philip is distressed by Alice’s emotional withdrawal from him, and he becomes intent on trying to win her back. However, he briefly flirts with a psychologist named Cynthia Jalter. Cynthia says that Philip’s relationship with Alice in unhealthy and unsalvageable. Then, when Cynthia tries to seduce Philip, he gently rebuffs her and maintains that he is still in love with Alice.

Carmo Braxia, a visiting scientist from Italy, arrives on campus to perform his own experiments and examinations on Lack. Philip is assigned to divide and manage lab time between the various research groups. Braxia seems confident that Lack’s nature is within the bounds of comprehensible physics and that understanding Lack is merely a matter of finding the correct type of signal that can map Lack’s elusive interior. Meanwhile, Philip recruits Georges De Tooth, a professor from the English department, to perform a different experiment; Tooth sits within Lack and writes, hoping that the text will provide some insights about Lack. Unfortunately, the experiments is not fruitful.

Alice continues to be obsessed with Lack, and she offers herself to lack, but Lack does not consume her. Alice is saddened but remains determined; she tries to think of other ways in which she might compel Lack to consume her. Eventually, Braxia decides to leave the university, but before he does, Philip converses with him. Braxia believes that reality cannot exist without consciousness to perceive it. Braxia believes that Lack is a pocket reality that has no consciousness to perceive it. He also believes that, in order to fill this void of consciousness, Lack has become imprinted on Alice’s consciousness and consumes objects based on Alice’s preferences. Philip enters Lack, believing that if Lack consumes him, it will be a confirmation that Alice loves him. Lack does consume Philip, and Philip then merges with Lack. At the end of the novel, Alice prepares to offer herself to Lack again, and Philip/Lack waits to receive her.

More summaries and resources for teaching or studying As She Climbed Across the Table.

As She Climbed Across the Table from BookRags. (c)2022 BookRags, Inc. All rights reserved.