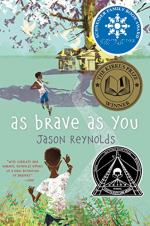 As Brave as You Summary & Study Guide

As Brave as You Summary & Study Guide Description

As Brave as You Summary & Study Guide includes comprehensive information and analysis to help you understand the book. This study guide contains the following sections:

This detailed literature summary also contains Quotes and a Free Quiz on As Brave as You by Reynolds, Jason .

The following version of the book was used to create this study guide: Reynolds, Jason. As Brave As You. Antheneum Books for Young Readers, Simon and Schuster, New York, New York, 2016. Kindle AZW file.

Genie Harris and his older brother, Ernie, arrive at his grandparents' home in June, a couple of weeks before Ernie's 14th birthday. Genie is aware that his parents are struggling in their marriage, and he fears that the biggest challenge ahead of him is that he will be forced to choose to live with one of his parents when they divorce. Genie is a worrier, and he has already found a myriad of things that concern him by the time he arrives at his grandparents' home. His parents spend the night but leave after breakfast the next morning, returning to their home in Brooklyn. They will soon leave for a two-week vacation to Jamaica, and Genie hopes they will return with their marriage rejuvenated.

Genie quickly discovers that his grandfather is blind – a fact his grandfather tries to keep hidden because he hates that people treat him as if he is incapable of taking care of himself. Grandpop sets Genie's mind at ease by inviting him to ask every question he can think of, and Genie has lists of questions. Their conversation sets Genie's mind at ease about Grandpop.

Things are different at their grandparents' home than from the life Genie and Ernie live in the city. Grandma wakes them very early each morning for their chores. They help tend the pea patch, picking mature pods and watering the plants. They get rid of the dog poop from Samantha's area of the yard. They also have free time, and they soon begin spending much of that with Tessa, a girl who lives in the neighborhood. Meanwhile, Genie begins to connect with Grandpop, and he discovers that Grandpop has a room filled with plants and birds. The room is meant to simulate the outdoors because Grandpop never leaves the house except to go to doctor's appointments. Not long after Grandpop lost his sight, he was bitten by a copperhead. Since that day, he spends almost all of his time indoors. Grandpop asks Genie to help him begin navigating the outdoors again. With his hand on Gene's shoulder, Grandpop begins to become comfortable walking outdoors.

Grandpop was a rifleman in the military, and he taught his sons and other young boys in the neighborhood how to shoot on their 14th birthdays. On Ernie's birthday, Grandpop and a neighbor, Mr. Crabtree, take Ernie to the woods to fire Grandpop's pistol. Genie is excited at the possibility of firing the gun for himself, but Ernie is not at all interested. Spurred on by Grandpop, Ernie agrees to the rite of passage and immediately fires the gun. The gun's strong recoil causes Ernie to fall to the ground. His face is bloody, and three teeth knocked out. Grandma rushes him to the hospital where two of the teeth are restored, but the situation at the house becomes incredibly tense as each family member deals with their fears and feelings.

Genie sees the argument between Grandma and Grandpop as Grandma accuses him of pushing Ernie into firing the gun though Ernie did not want to fire it. Genie struggles with his own guilt over knowing Ernie had fired the gun partly in an effort to be certain Genie would be safe when his turn came. The next morning, Genie is surprised to see that his grandparents have made up with each other, and they each apologize to Ernie and Genie.

When Genie's parents arrive – three days early because of their worry – Ernest Sr. and Grandpop have a horrible argument. When Grandpop makes it clear that he is contrite, the tension between the two men seems to dissipate to a degree. As Genie, Ernie, and their parents prepare to leave the farm, Genie realizes that he has to own up to a mistake he made. He confesses to Grandpop that he fed apple seeds to one of Grandpop's birds, killing it. Grandpop has known the bird was missing all along, but he was giving Genie a chance to explain. This is a significant moment in Genie's maturation.

As Brave as You from BookRags. (c)2022 BookRags, Inc. All rights reserved.