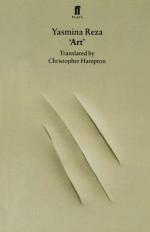 Yasmina Reza
This Study Guide consists of approximately 17 pages of chapter summaries, quotes, character analysis, themes, and more - everything you need to sharpen your knowledge of Art.

Art is a critically acclaimed play written by the French playwright Yasmina Reza. The play was written in French and translated to English shortly after its creation. Art earned the Tony award for Best Play in 1998, shortly after beginning a Broadway run. Yasmina Reza began her career as an actress in Paris, often playing the role of a seductress, but decided that her true talent lay in writing instead. She has said in interviews that she got the idea for Art after a good friend bought an expensive painting and the two had a good laugh. She has said that Art is representative of what could have happened in their friendship if either person had hard feelings toward the other in their real-life friendship.

The play is written in one act with several changing scenes. The set is very minimal, with the only thing changing between each characters’ apartment being a painting on the wall. All of the dialogue between characters occurs within the confines of one of the three apartments. On several occasions, the characters step out of the scene to address the audience directly with their own personal thoughts. The minimal set forces the audience to focus on the text and interaction of the three characters – both places where the play draws its strength.

The play begins with Marc telling the audience that his old friend Serge has bought a white painting. Inside Serge’s apartment, Marc sees the white painting for the first time. Serge is clearly proud of his purchase and is looking for some reassurance from his buddy that spending 200,000 francs was worth it. Marc disagrees and criticizes Serge for making such an extravagant purchase for something that is so plain and lacking of artistic value. Serge is offended and an intellectual battle begins that lasts the duration of the play. Each man tries to get their mutual friend Yvan to side with him, but Yvan’s desire to remain neutral ends up angering both of his friends instead.

Throughout the course of the play, the men wonder how they all became friends and if their friendship is truly worth all of the tension. Though each can come up with reasons that it may be better to separate from each other, they all talk themselves into keeping the friendship. Serge’s purchase of the painting triggers several heated discussions that range from the loss of Marc’s sense of humor to Yvan’s annoying habit of trying to make everyone happy. The men argue, debate and offend each other but manage to reach a common ground by the end of the play. Marc addresses the audience in vague terms in the final lines, saying that the painting represents a man who “moves across a space and disappears.”

More summaries and resources for teaching or studying Art.