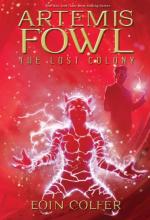 Eoin Colfer
This Study Guide consists of approximately 19 pages of chapter summaries, quotes, character analysis, themes, and more - everything you need to sharpen your knowledge of Artemis Fowl.

Artemis Fowl: The Lost Colony is the fifth book in Eion Colfer's Artemis Fowl series. In this book, Artemis has discovered that the time spell cast over Hybras is beginning to decay and that demons will soon be thrown through time to certain death. Artemis sets out to help the fairy world fix this problem, but is sidetracked when Minerva, a young girl as intelligent as Artemis, kidnaps a demon to earn a Nobel Prize for herself. Artemis Fowl: The Lost Colony is another exciting adventure that will keep Eion Colfer fans on the edge of their seats.

Artemis Fowl is in Barcelona, Spain with his bodyguard, Butler, in an attempt to catch sight of a demon traveling through time. When the creature fails to arrive at the appointed place and time, Artemis prepares to leave. However, the demon then arrives in an unexpected place, taking Artemis with him when he again jumps through time. Butler manages to anchor himself and Artemis, bringing Artemis back to his own time. A short while later, Artemis and Butler travel to Italy where Artemis again expects a demon to appear. As they wait for this demon, Artemis tells Holly Short, a section 8 of the LEP officer, that he thinks that Hybras, the island where the demons live, is about to fall apart as the spell keeping it lost in time begins to degrade.

As Artemis and Holly talk, Butler notices a young girl and her adult companions apparently expecting the demon as well. Artemis sends Holly to follow this group as the demon appears because it is too late to do anything to stop them. The girl and her companions anchor the demon to earth with a silver bullet and sneak it out of the opera theater. Holly follows them and travels on a train to Naples. On the trip, Holly and her team learn that the girl is Minerva Paradizo, a twelve year-old French girl who has an exceptional IQ. The girl, along with her father, a security officer, and a notorious criminal, are behind the demon's kidnapping.

Artemis, Holly, and Butler follow the Paradizos to Naples where they plot to break into their highly secured home to rescue the demon. However, in the process of saving the demon the criminal in Minerva's employ becomes unglued and kidnaps Minerva for the purpose of forcing her to provide for him another demon. When Artemis becomes aware of this, he arranges an exchange, Minerva for the demon.

During the exchange, Artemis instructs the demon to drop the silver that has anchored him to earth. Artemis knows that the demon will reform because of a silver piece of artwork in the same area as the exchange. The trick works and Artemis manages to gain both the demon and Minerva's freedom. Artemis then takes the demon to an art exhibit that showcases a rock sculpture of a demon. Artemis believes that this sculpture is of the original warlocks who cast the spell over Hybras. Artemis hopes that the demon can free these warlocks so that they might be able to return Hybras to Earth. However, things go wrong and Holly ends up with a bomb handcuffed to her wrist.

Artemis asks Holly to fly him and the two demons, one of which was rescued from the sculpture, to another building where they can diffuse the bomb. However, there is too much weight for Holly's wings and they begin to fall. Artemis removes the silver that is anchoring the demons to the earth and they go through time to Hybras. While there, Artemis figures out a way they can return Hybras to earth. However, they are overrun by angry demons who think they have come to destroy the island. There is a struggle, but Artemis, Holly, and the demons manage to reverse the spell and save all of Hybras. However, when they reach home they discover they have been gone three years.

More summaries and resources for teaching or studying Artemis Fowl: The Lost Colony.