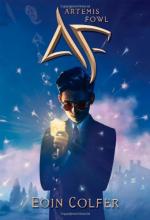 Eoin Colfer
This Study Guide consists of approximately 64 pages of chapter summaries, quotes, character analysis, themes, and more - everything you need to sharpen your knowledge of Artemis Fowl.

After his father's disappearance, Artemis Fowl kidnaps an elf, Captain Holly Short, in an effort to ransom gold to replenish his family's wealth. The twelve-yearold exhibits extraordinary skills and utilizes fantastical technology to manipulate situations to his benefit. This action triggers a rescue attempt by the underground's elite LEPrecon (Lower Elements Police reconnaissance). A variety of supernatural characters, collectively known as the People, gather at the Fowl manor in an attempt to save Holly. Allied with the faithful Butler, Fowl is determined to be the victor.

More summaries and resources for teaching or studying Artemis Fowl.