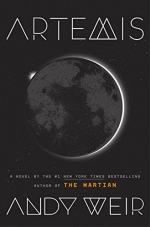 Andy Weir
This Study Guide consists of approximately 37 pages of chapter summaries, quotes, character analysis, themes, and more - everything you need to sharpen your knowledge of Artemis.

This detailed literature summary also contains Quotes and a Free Quiz on Artemis: A Novel by Andy Weir.

Artemis, a novel by Andy Weir, takes place at an unspecified point in the future. Jasmine “Jazz” Bashara is a 26-year-old woman who lives in Artemis, the moon’s first and only settlement. She and her father moved there from Saudi Arabia when she was six years old. Her father, Ammar Bashara, works as a welder. When Jazz was a teenager, she and Ammar had a falling-out when she indirectly caused an accident that destroyed her father’s welding shop. Jazz has been trying for years to raise enough money to pay him back. She works as a courier and also makes money by smuggling contraband into Artemis. She is aided in this by her friend Kelvin, who lives in Kenya and works for the Kenya Space Program.

One day, while Jazz is delivering contraband to Trond Landvik, a wealthy businessman, Trond says that he wants to hire Jazz to sabotage Sanchez Aluminum. He wants to take over their moon-based mining and smelting operations. When Trond offers to pay more than twice what Jazz owes her father, Jazz accepts the job. Jazz acquires necessary items from her father and from a scientist named Martin Svoboda, but she does not tell them about the illegal sabotage job. While wearing a spacesuit, she travels across part of the moon’s surface and manages to destroy three of Sanchez Aluminum’s four harvesters before she must flee. She returns to Trond’s house to confer with him about the next steps to take, but she finds him murdered.

Jazz disguises herself and visits the hotel room of Jin Chu, a mysterious business associate of Trond. In his hotel room, she finds an assassin waiting, apparently assigned to kill Jin Chu. She evades the assassin and takes a mysterious cable sample from Jun Chu’s room. Svoboda analyzes it and says that it is an extremely efficient fiber optic cable that would be incredibly valuable if manufactured and sold. The material can only be manufactured in low gravity. Jazz discovers that Sanchez Aluminum is owned by a crime syndicate, O Palácio. Therefore, if they retain exclusive mining and smelting rights, Artemis will fall under criminal control.

Jazz recruits the assistance of her father and various other associates. Together, they devise a plan to foil O Palácio. Jazz goes to the Sanchez Aluminum smelting facility and destroys it via sabotage. However, when she returns to Artemis, she sees that due to the sabotage, the facility has begun to pump toxic air into Artemis. She manages to open reserve oxygen tanks and use them to force out the contaminated air. Artemis is saved from toxic gas and from the threat of criminal control. Artemis’ economy will soon boom due to ZAFO production. Thus, Jazz is able to look forward to a large increase in her income from smuggling.

More summaries and resources for teaching or studying Artemis: A Novel.