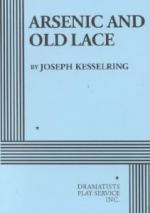 Joseph Kesselring
This Study Guide consists of approximately 36 pages of chapter summaries, quotes, character analysis, themes, and more - everything you need to sharpen your knowledge of Arsenic and Old Lace.

Arsenic and Old Lace is a stage play and is therefore written to be seen and heard by an audience, rather than be read. The characters never interact with the audience; the majority of the information is presented via dialogue between the characters, although a small amount is conveyed via actions which are suggested in the “stage direction” notes in the text of the play. Essentially the audience (or reader) is viewing what is happening through a window into the living room of the Brewster home, and their point of view is that of an observer.

The entire play takes place in the living room of the Brewster family home, which is located in Brooklyn, New York. The play is set in the “present”, which in this case indicates the year the play was written, 1941. The living room is described as being “Victorian”, and...

More summaries and resources for teaching or studying Arsenic and Old Lace.