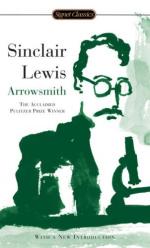 Because Martin cannot convince the island leaders, and even Sondelius, to agree to let only half the island residents to be injected with the phage, Martin must take the issue to a special Board. Unfortunately for Martin, Ira Hinkley reveals some of Martin's and Gottlieb's past mistakes to the Board members but Sondelius ardently supports his colleagues and the Board decides to deliberate the matter. Sondelius, however, still refuses to be injected with the phage because Martin will not give the phage to all of the island residents.

Martin is approached by a man named Cecil Twyford who convinces Martin to come to his parish, St. Swithin, to see what Martin can accomplish there without the interference of those who are objecting to Martin's plan. Four days later Martin learns that Ira Hinkley has died from the plague.