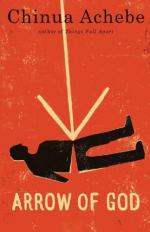 Chinua Achebe
This Study Guide consists of approximately 56 pages of chapter summaries, quotes, character analysis, themes, and more - everything you need to sharpen your knowledge of Arrow of God.

This detailed literature summary also contains Quotes and a Free Quiz on Arrow of God by Chinua Achebe.

The following version of this book was used to create this study guide: Achebe, Chinua. “Arrow of God”. Heinemann – an imprint of Pearson Education, Limited. 1986 Edition. Its primary point of focus is Ezeulu, High Priest of the group of Nigerian villages known as Umuaro, but frequently shifts narrative perspective to the experiences and attitudes of a large cast of characters, including leaders of the British colonialist government in the region.

As the narrative begins, Ezulu contemplates the appearance of the new moon, and the many levels of responsibility as High Priest that are associated with that appearance – to name the days on which community rituals are to take place, to lead his community, to be a good father to his sons, and to name a successor. He also contemplates how his interactions with the white man – in particular the regional governor, a man he thinks of as Wintabota, are viewed with suspicion by many in the community of villages that he leads.

Meanwhile, a shift in narrative focus reveals that Wintabota’s name is actually Winterbottom; that he has limited power and influence because he tends to disagree with his supervisors; and that he has passed certain of his responsibilities to a young second-in-command, Tony Clarke.

Narrative shifts back and forth between the situations of Ezulu and Winterbottom, who becomes seriously ill and is unable to fulfill most of his responsibilities, leaving Tony Clarke in charge. At the same time, Ezeulu struggles to moderate the responses of several rebels in Umuaro (including a vocal faction led by the outspoken Nwaka), and moderate the activities of his sons, including the artistic Edogo and often violently impulsive Obike. Ezeulu takes particular interest in his son Oduche, whom he has sent to study in the white man’s church; Ezeulu believes that knowing one’s enemy, as he hopes Oduche will get to know the white man, helps anticipate and prepare for eventual conflict.

That conflict comes when Tony Clarke, acting on the orders of both Winterbottom and his superiors, summons Ezeulu to the British compound; their intention is to make Ezeulu the Warrant Chief, or white-endorsed chief, of the area. After a degree of conflict over whether Ezeulu will actually go, he finally makes the journey, only to refuse what he is being asked to do. An outraged Tony Clarke throws him in jail, but later has a change of heart and, as a result of a similar change of heart in his superiors, releases Ezeulu, who then returns to Umuaro.

Back in his village, Ezeulu recovers from the exertions of his trip, watching as the villages engage in yet another ritual of the seasons. He has also, however, fallen behind in his own ritual practices, and simultaneously become resentful of Nwaka and the other rebels. So, in order to both follow the rules of ritual and punish those who disbelieved him, he adheres to the rule of rituals and delays the anticipated village harvest. As the village suffers, Nwaka and other rebels become increasingly resentful. Ezeulu questions his decision, but stays with it. Meanwhile, the white leader of the area’s Christian church (with whom Oduche is studying), takes advantage of the conflict and tells the villagers that if they worship HIS god, they can harvest their crops safely and happily.

Eventually, the rules allow Ezelu to in turn allow the harvest, and it commences. A short time later, the participation of Obike in another ritual results in his death, and Ezeulu is described as falling into madness. The novel concludes with a description of how large numbers of the villagers did as the white church leader suggested, and went to his church. There, the novel ends.

More summaries and resources for teaching or studying Arrow of God.