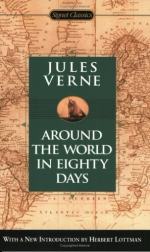 Around the World in Eighty Days Setting & Symbolism

Suez is the small town at the Suez Canal in Egypt, which at one time belonged to the British Empire. Suez is the first foreign port fully described in the storyline. During their stop at Suez, Fogg and Passepartout run into the bumbling and misguided Detective Fix. Passepartout is amazed by the sights and sounds of being on the African continent.

Aden is an island which had historic fortifications started by Solomon's engineers. This island is a brief stop for fuel and supplies before continuing on to Bombay. Again Fogg leaves Passepartout to run errands and enjoy the sights, while he ignores his surroundings and returns to his cabin.

Bombay is part of British Indian during British Imperialism with all its color and wonderful architecture. Fogg, Passepartout, and Fix disembark in Bombay for their trip across the Indian subcontinent. The description of the British colonial...

Around the World in Eighty Days from BookRags. (c)2023 BookRags, Inc. All rights reserved.