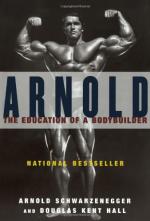 Arnold: The Education of a Bodybuilder Themes

In describing his early life, Arnold states his need for special attention and says it may have arisen because his elder brother received more than his share of attention from their father. This reference to an elder brother is never repeated, and there are no photographs or facts about him, though there are many on the subject of Arnold's parents and repeated references to "the family." This exclusion of any reference to his older brother seems to indicate that the sibling rivalry is deeper, even traumatic.

Certainly Arnold's autobiography shows all the classic traits of someone following the second son life script. The early rebellion against family church going, the substitution of the bodybuilders at the gym for father figures and the determined non-conformity in choice of career.

Again the emphasis on leaving his hometown and journeying to Munich, London and the rest of Europe and...