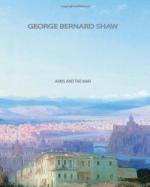 Arms and the Man Discussion Questions

Shaw greatly admired the artist and socialist William Morris. Write a brief biography that identifies Morris and his legacy.

The title of Arms and the Man comes from the opening line of Virgil's epic poem "The Aeneid." Write a summary of this poem and contrast its message to that of Shaw's play.

Arms and the Man was set during a war in the Balkans between the Bulgarians and the Serbians. The Serbians were recently again involved in a war that resulted in international intervention. Trace and report on the history of the various Balkan conflicts from the late 1800s to the present day, including the Serbian...