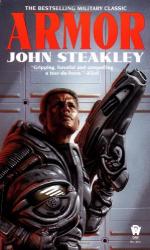 John Steakley
This Study Guide consists of approximately 34 pages of chapter summaries, quotes, character analysis, themes, and more - everything you need to sharpen your knowledge of Armor.

This detailed literature summary also contains Topics for Discussion and a Free Quiz on Armor by John Steakley.

Armor, by John Steakley, depicts battles that engulf humanity in a war-torn future. Felix finds himself enlisted as a Fleet scout on a planet called Banshee to fight monstrous creatures known as Ants. Jack Crow, a well known rogue and thief, gets tangled in a plot of a ruthless space pirate to take control of an Earth-like planet called Sanction. The Armor that Felix wears in battle will link the two struggles and change the lives of everyone involved.

Felix is the born ruler of his home planet Golden. When his wife dies in a tragic accident, Felix leaves his planet and signs up with the Fleet to fight with the rest of humanity against Ants. Each warrior in the Fleet is given custom fitted black Armor that can only be operated by the owner. This armor gives the wearer super human strength, speed, and reflexes. Felix is dropped on the Ants' home planet of Banshee after little more than six months training. Felix is put through battle after battle and if often the sole survivor picked up.

Felix had joined Fleet with the desire to die but survives many battles while watching those around him die. After many missions Felix flees the Fleet and settles on a planet where he changes his name to Lewis and becomes a local drunk. Felix/Lewis is the first person on the planet which means he owns it and he names it Sanction.

Four years later Jack Crow escapes prison with a band of space pirates wanted for mutiny. In need of fuel, the pirate ship makes its way to Sanction to steal their power source. In return for his help, the pirates give Jack a small space shuttle they found abandoned with a black suit of Armor. It is not known that the abandoned shuttle and armor belonged to Felix. Jack is able to convince the scientists at the Sanction Project Complex to trust him despite his pirate background and gives them the armor as a peace offering.

Jack befriends the head scientist, Hollis Ware, and they devise a way to retrieve the damaged memory banks off the armor by directly translating it directly to the human brain. They begin to feel as if they truly know Felix. When the time comes for Jack to betray Hollis, Jack is unable. They make a stand against the pirates but are clearly going to lose when the town drunk, Lewis, walks in. Lewis is able to put on the Armor and it is here that Jack and Hollis realize he is Felix. Felix/Lewis destroys the pirates and the last that Hollis and Jack see of Felix he is on the outside of the pirate space ship as the pirates flee into space.

More summaries and resources for teaching or studying Armor.