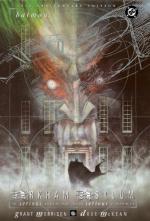 Grant Morrison
This Study Guide consists of approximately 36 pages of chapter summaries, quotes, character analysis, themes, and more - everything you need to sharpen your knowledge of Arkham Asylum.

This detailed literature summary also contains Topics for Discussion and a Free Quiz on Arkham Asylum by Grant Morrison.

Arkham Asylum is a graphic novel featuring the super-hero Batman, that tells the story of Joker and other insane Batman villains taking over the Arkham Asylum for the criminally insane where they are incarcerated. Batman goes into the insane asylum in exchange for the innocent hostages. The story of Amadeus Arkham, founder of Arkham Asylum, unfolds as Batman faces his own inner demons as well as the insane inhabitants. After discovering that the administrator of Arkham Asylum unleashed the inhabitants in order to lure Batman to his death, Batman destroys the asylum with an ax and gets the madmen to release him.

Arkham Asylum begins with an excerpt from Amadeus Arkham's journal, and Arkham's story is interspersed with the modern-day story throughout. Amadeus is trapped in Arkham house as a child, caring for his ill mother who loses her mind. When his mother dies, supposedly by suicide, the grown Arkham, who is now a psychiatrist, decides to convert the house into a home for the criminally insane. While the changes are being made to the house, Arkham's wife and young daughter are murdered by a fugitive criminal lunatic Arkham had been treating. Despite this horror, Arkham opens Arkham Asylum, and one of his first patients is Mad Dog, the killer who murdered his wife and child. A year after the murders, Arkham kills Mad Dog, disguising it as an accident.

As the story of Arkham unfolds from the pages of his journal, Batman's story also unfolds. Batman is called to the commissioner's office because the inmates of Arkham Asylum have taken over the madhouse. They are holding the staff hostage. Batman agrees to go into the asylum if the criminals will let their hostages go. When Batman arrives, he finds the Joker in charge. There are also two doctors who have insisted on staying with the patients: Dr. Charles Cavendish, the head administrator, and Dr. Ruth Adams, a psychoanalyst.

The Joker has Dr. Adams psychoanalyze Batman as a kind of torture. Batman's fear and hurt regarding his parents' murder when he was a boy begins to reveal itself. Then, the Joker makes Batman play a game of hide and seek. Batman has to hide, and the criminals will come find him. Batman goes into the corridors of Arkham Asylum, where he meets again with the memories of his past and also confronts the villains that he has sent into the asylum. Finally, after Batman defeats the final villain, Croc, who symbolizes his personal demons, Batman follows a trail of blood into Amadeus Arkham's secret room.

The end of Amadeus Arkham's story is revealed. Arkham's mother did not kill herself. Arkham believed that his mother was haunted by a bat and slit her throat to save herself. Arkham later tries to kill his stockbroker, and then he is imprisoned in his own asylum. He carves a spell into the floor with his fingernails, feeling that he is finally free within his insanity, and then he dies.

Cavendish has found Arkham's journal and has also gone insane. He believes Batman is the bat that haunted Arkham's mother and that Batman is feeding the insanity of Arkham house by bringing insane criminals there. He freed the prisoners in order to lure Batman there. Cavendish tries to kill Batman, but Dr. Adams stops him by slitting his throat. Batman goes back into the asylum and tears it apart with an ax. Then, he gets the prisoners to let him go by giving Two-Face, one of the criminals, back the coin he uses to make all of his decisions.

More summaries and resources for teaching or studying Arkham Asylum.